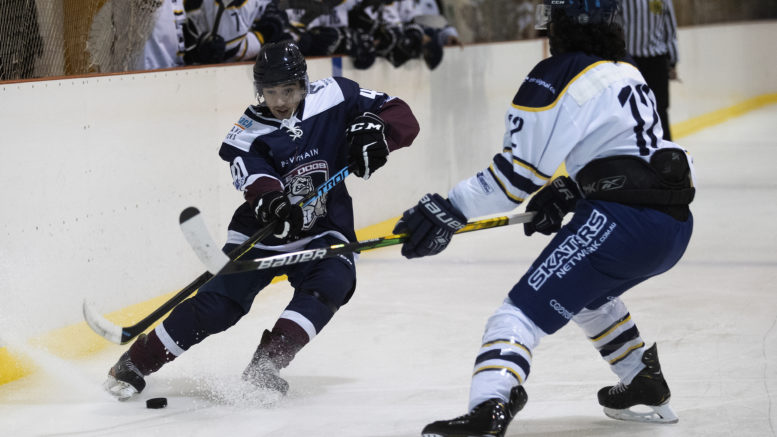 In the first home game for the Sydney Ice Dogs at their new home venue, the Erina Ice Arena, the team has recorded its first win in the 2021 McCormack Cup, against the CBR (Canberra) Brave.

After losing the first three games to open the 2021 season, this 5 – 2 victory for the Ice Dogs only came after trailing to their guests earlier in the game.

By the end of the second period, the Ice Dogs were trailing 1 – 2, although they came out firing in the third period, scoring four unanswered goals to take the win in front of a vocal home crowd.

Led by Canadian Grant Toulmin, who had four assists in the win, the Ice Dogs top line did most of the damage.

After a difficult start to the season, Ice Dogs Head Coach Andrew Petrie applauded his sides effort in the come from behind win.

“We had to make a statement tonight that we’re a legitimate contender,” he said.

“We shuffled the lines and adjusted our strategy to be more aggressive on the puck and to made sure we got more pucks on the net.

“Our top line was looking for redemption after giving up four goals last week in Canberra.

“They were instrumental tonight in the win, scoring three even strength goals and adding a powerplay goal.”

Rookie Ice Dogs Goalie, Jacob Doornbos had a stellar night against his old team, posting a 93.8 save percentage, allowing just two goals on 32 shots and making several big saves to preserve the Ice Dogs lead late in the game.

“I was especially happy with our team defence” continued Petrie.

“The guys did a great job in our own defensive zone tonight; they were controlled and physical in front of our net.

“We did a great job of clearing pucks out of danger areas and getting pucks to our forwards.”

The Ice Dogs will be back in action at the Erina Ice Arena on Saturday 26 of June, when they again host the CBR Brave, puck drop at 5pm.

Hundreds turn up for One Last Skate