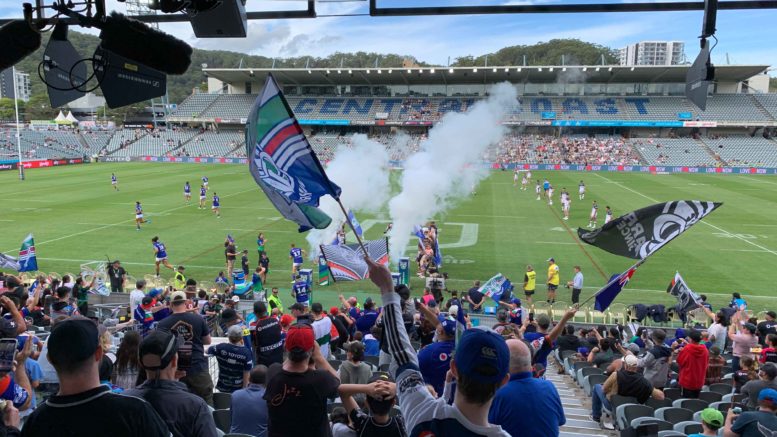 GOSFORD: The early efforts of the New Zealand Warriors against the North Queensland Cowboys has secured for them the win at Central Coast Stadium on Sunday, May 2.

It was a close to perfect start for the Warriors who managed to post 18 points unmatched in the opening quarter of the game.
The first chance came from an early attack began by some quick pass play that brought the ball out wide to Ben Murdoch-Masila in space.

The Second Rower marched the ball up to the 10 metre mark before being tackled. In the next phase, the ball was swung back the other way and an inside step and offload from Adam Pompey reached Josh Curran who took it over the line.

However, a video referee check found the ball to have been fumbled just over the line. The early chance showed to the Queensland opposition the strength of the Warriors attack they would face all match, but was also a lesson for the New Zealand team to be clinical in the pivotal moments.

This lesson was learnt quickly by halfback Kodi Nikorima who scored the first try of the match shortly after in the 7th minute. He began it with a well-executed dummy pass to slide in between the Cowboy defensive line and set him up for a dash into the corner.
Following up his try with a conversion gave his team a six point lead and the Warriors took this encouragement to press harder in attack.

The great strength in their play came from their ability to advance up the field ball in hand and keep the Cowboys on the back foot, utilising offloads to great effect in keeping the play alive. One advance in particular saw the Warriors advance 71 metres and this set them up for their second try to shortly follow.

Nikorima’s second line of attack pass to Roger Tuivasa-Sheck opened up the Cowboy defence with a couple of miss tackles. Now in space, the Warriors captain was sport for choice in picking out the pass with three team members lining up to receive the ball.
It was Rocco Berry on the inside who Tuivasa-Sheck linked with, giving to the Centre his very first try in the NRL.

Nikorima’s missed conversion was made up for soon afterwards when a late tackle on Reece Walsh gave the Warriors an easy penalty goal in front of the posts. Only two minutes later, the third try came for the crushing Kiwis, this time put away by Murdoch-Masila.

From the half way mark, Nikorima again showed his agility by slicing in between Jordan McLean and Ben Condon for the Cowboys to bring his team into downfield space.
He picked out Walsh with a delayed pass, who cut back inside and worked his upper body in the two-man tackle to free up his arms and find the offload to Murdoch-Masila.

The Second Rower made up for an earlier drop ball with a simple grouding beneath the posts that led to an 18 point lead one quarter into the game.

The Cowboys continued to struggle to put together consistent phase play, unable as they were at this stage to complete a set of six in the attacking quarter without Warriors muscle in the tackle leading to the handling mistake.
Yet the opening try did come for the Queenslanders before half time through Reece Robson. It came from a weighty dummy by the Hooker within lunging reach of the try line, one that left Jazz Tevunga red-faced after falling for it.

Nonetheless, the Warriors were the last to find profit in the first half, scoring in the dying moments to bring their lead out to 20 points. Adam Pompey took the meat pie this time after a row of well-timed passes gave him the ball in half a yard of space. The Centre still had to shake off the tackle from Feldt, whose expression showed his disappointment in his team’s first half performance.

The second half brought hope for the Cowboys early through a 47th minute try for Murray Taulagi. It came from Scott Drinkwater’s grubber into the dead ball area, which spiked up on the right bounce to find the hands of Taulagi steaming just ahead of Edward Kosi who did his best to get back in time.

Another try for the Cowboys brought them right back into the game only minutes after scoring their second. The break occurred on half way with a cut out pass by Valentine Holmes to Taulagi, who put on the pace to get around Kosi and then find the inside pass back to Drinkwater.
The successful conversion brought the Cowboys back to within 8 points of the Warriors with half an hour of play still to go, and a following disallowed try for the Warriors only increased the pressure on the home team to hold firm.

The next opportunity for them ended with an unforced error by Walsh, who dropped the pass in a very advantageous attacking position. It was a clear sign of the changing momentum from the first half when the Warriors were flawless in their execution against their fumbling visitors.

For the next ten minutes, the teams remained in a midfield deadlock with neither able to add to their scoreboard tally. A chance for Walsh to feed Wayde Egan the ball for a simple run in try was foiled by a slip and a concussion hit on Muirdoch-Masila accentuated the inability of the Warriors to again break away.

This was immediately followed by another try for the Cowboys to bring them within a try of taking the lead. The quick passing down the line brought the ball to Drinkwater, who drew in Kosi from defending the wing and opened up the space for Taulagi. The pass found the wide man in space and he ran it over to make the scoreboard strike 24 – 20.

The tiring Warriors had ten minutes to hold off the come back from the Queenslanders, who kept pushing hard on the try line. Another grubber from Drinkwater was close to coming off, and then a final tackle on Connelly Lemuelu brought a fortunate knock on.
Queensland’s next attack brought Taulagi over the line, but the final pass was called forward to deny them the equalising try.

After a long five minutes of try line defence, the Warriors were finally able to clear the ball after being rewarded a penalty. The following Warrior attack brought the ball all the way to the try line, but a knock on from the final phase grubber prevented the points from following.

The Cowboys had the ball for the final play of the game, but they were left with too much to accomplish despite making a good effort to advance up the field. The chip through was covered by Ken Maumalo who took the ball into contact to end the match.

The hard fought win was much needed for the Warriors who now advance up to seventh place with four wins and four losses. Their next challenge will be against the Manly Sea Eagles away on Sunday, May 9.