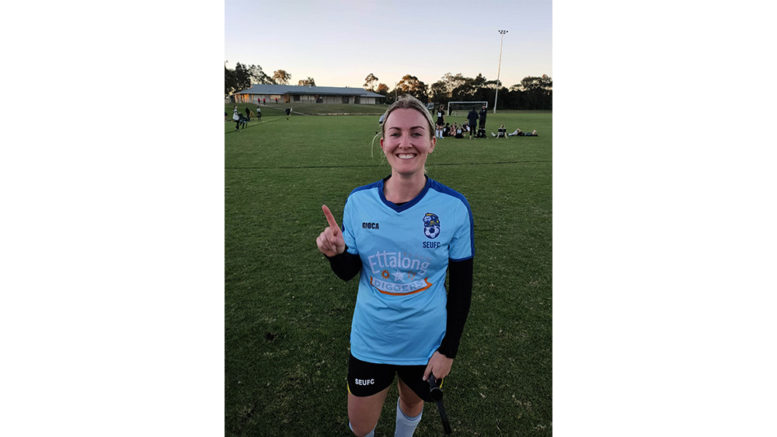 The BPL fixture kicked off first at James Browne Oval at 2:45 pm and it took all the way to the final moments of injury time for Southern to secure a 2 – 1 win.

The match was a meeting between two teams in the top four, with the visiting Killarney side hopeful for a good result to maintain their recent dominance in the league over the past eight years.

They started well, scoring early to establish a single goal lead, but it was not long before the equaliser came from Michael Tawyer.

The goal capitalised off some great team build up play that led to a low cross into the box.

The Killarney defender dived at the ball to deflect it away from goal only for it to land at the feet of Tawyer, who side footed the ball with power and precision past the still-footed goalkeeper.

With another 50 minutes of play still to be had, Southern were forced to face the rest of the game a man down.

In the eyes of Club President, Glen Balneaves, the team responded in great character with each player giving an extra 10% to cover the lost player.

In the dying moments of the match a pass intercept in the Southern back line led to a lobbed through ball for striker and ex-Central Coast player of the Year Keith Gumbs to drive the ball firmly into the back of the net, as the Southern team and their fans went wild.

Meanwhile in the women’s match at EDSAAC Oval, an early lead for Southern gave them the momentum to follow through with solid 1 – 0 victory.

From the get go, Southern established a greater control over the flow of the game than their hosts.

After maintaining territory in their attacking half with multiple shots and good combination passing, a penalty was given to Southern for a handball in the box.

The shot was well saved by the Killarney district goalkeepeer, but it was only a few minutes later that the goal eventually came for Southern.

From their defensive half, a throw-in found Tatum Ansiewicz who worked hard to move around the first defender and then drive in on goal until it was a one on one situation with the keeper.

Striking the ball low and hard, Ansiewicz found the bottom corner of the net to give to her team the opening and only goal.

In the eyes of Southern Coach, Augusto Terra, the game was won because of the good connectivity between the midfield and defensive line that shut down most of Killarney’s advances on goal.

“Overall the game was hard, but most of the time we defended well and created more chances than the other team,” Terra said.

“Our two central midfielders, Alana Currie and Elaine McConaghey, played really well, preventing Killarney play the ball through most of the time, and when the ball did get through our defenders were able to get to it first and I think that was the main reason we were able to stop them creating chances.

“Letisha Waddell also played really well, a defender who was really well positioned and made good tackles in one on one situations.”

The win lifts Southern into fifth place in the WPL, behind fourth place East Gosford only on goal difference.

In the BPL, Southern’s win has secured them in third place, one point ahead of the defeated Killarney team in fourth.

Their next challenge will be The Entrance on Sunday, May 23, a difficult opposition who have also won three games so far this season.

For the women, a bye week will precede their next game against Gosford City who are so far undefeated in 2021.