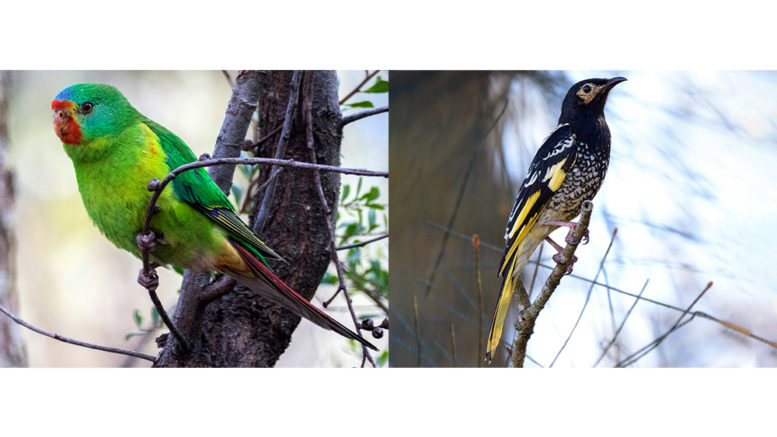 Two of Australia’s most critically endangered birds, the Swift Parrot and Regent Honeyeater, have been recent visitors to Chain Valley Bay.

Reports of the birds’ presence in recent weeks has attracted multitudes of birdwatchers and photographers hoping to get a view or a photo.

“We hope to get both Regent Honeyeaters and Swift Parrots this time of year”, said Allan Benson, spokesman for the Central Coast Birding Group.

“The birds are attracted to the Swamp Mahogany which is flowering strongly this year.

“Our group is actively surveying more than 70 sites on the Central Coast at the moment.”

Benson said the estimated number of Regent Honeyeaters was less than 300 birds.

While once a very common bird in the woodlands of NSW, habitat destruction and competition from other nectar feeders has reduced their number to a barely sustainable population.

“In fact, the situation is so dire, that birds are bred at Taronga Park Zoo to be released into the wild to bolster the wild population”, Benson said.

“Swift Parrots breed in Tasmania in Summer and make an annual migration across Bass Strait to the mainland over Winter.

“Their numbers have declined to less than 2,000 birds because of the clearing of native forests in Tasmania and the predation of the eggs and nesting females by an introduced predator- the Sugar Glider.

“We are crossing our fingers that we have further sightings of these birds.

“We encourage the public to report any possible sightings but warn that identification of both species can be tricky as there are similarities with more common species,” Benson said.

Central Coast Group of Birding NSW meets monthly on the fourth Tuesday at 7.30pm in the Progress Hall in Anzac Rd, Tuggerah.