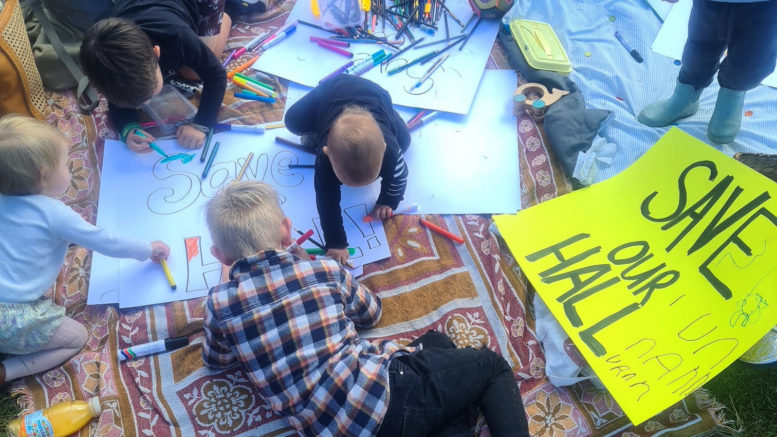 The community has asked to see the Termite Report which Central Coast Council says shows the Norah Head Hall should be demolished.

The community group fighting to save the sale of the hall and its playground has been approached by local tradies who are prepared to help restore the building, but they need to know the extent of the problem.

On Friday, April 30, Council put a notice up closing the entire site to the public.

A sign on the front door, with the heading CLOSED, says the entire site is off limits to the public – including the playground.

The community hall is just one of the sites that Council has earmarked for sale to raise money to pay down its debt.

Fifteen groups of operational classified land listed for sale and located across the Coast include: six properties located at Manning Rd, The Entrance, that are identified as affordable housing sites and may be sold for affordable housing projects; and two land parcels at 8 and 10 Bay Village Rd, Bateau Bay, once a new library facility is built within the Bateau Bay Square shopping centre.

The land at 10 Bay Village Rd is the site of the existing library and the adjoining land is vacant.

The conditions for the sale of these sites require that a new modern library is provided for the community.

Another potential sale is seven parcels of land on Wyong Rd, Tuggerah, with environmental zoning to be sold to the Mariners’ Football Club, which plans to continue to maintain and manage this green space as a buffer between the road and a proposed hotel development.

Operational classified land which requires rezoning includes two properties at Bushells Ridge Rd, Kiar and Bushells Ridge, that will have planning proposals lodged by Council to rezone from RU6 Transition to the IN1 General Industrial.

This would enable employment on these sites.

Ten land parcels where Council is seeking reclassification from community to operational land, and requiring Council to prepare a planning proposal to rezone the land prior to sale, include 2-4 Park Rd, The Entrance.

The Council report says that the bowling club on this site will be retained as part of a condition of sale to Mingara Recreation Club to build a new club house.

Seven hectares of land at 336-350 Terrigal Dr would see the basketball stadium and public parking retained with the intention to sell to the Breakers Country Club so that they can invest in additional basketball courts.

Land at 191 Wallarah Rd, Kanwal, with current use as the Wyong District Youth and Community Centre, could be incorporated in a sale process to the Wyong Rugby League Club, which plans on upgrading facilities to an improved standard, Council says.

The community is upset about some of the land sales, including land on the Woy Woy Peninsula and in Gosford.

But the fight isn’t over yet.

Norah Head Playgroup, which has been using the Norah Head hall for more than 40 years, has started a new Facebook page: Save Norah Head Community Hall.

It has an online petition for people to sign.

A group on the Woy Woy Peninsula with the Facebook page Save Our Community Reserves and Assets, is holding a free event with music from 3pm on Saturday, May 8, at 83-85 Brisbane Ave, Umina Beach.

The entire Coast is invited to attend and make the point that community assets should be keep in the community’s hands.

Residents are urged to write to the Administrator, currently, Dick Persson, but next week it will be RIk Hart, and argue the case for these assets.

The public has less than three weeks before public consultation closes on May 21.