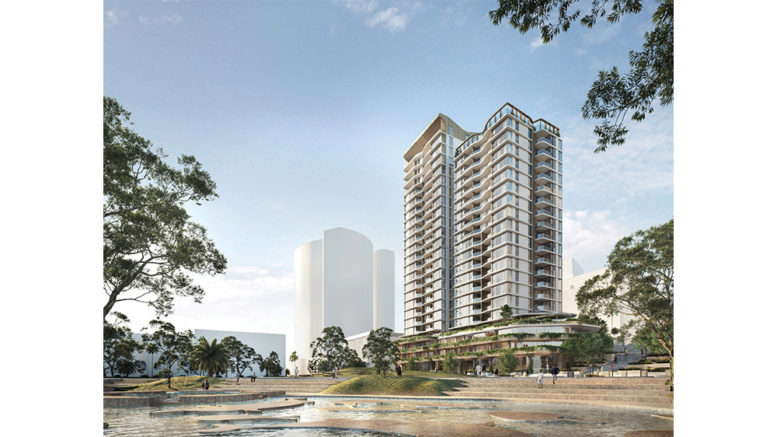 Residents have until May 20 to lodge a submission on a proposal for the first stage of the major Central Coast Quarter development slated for the southern end of Mann St, Gosford.

Now under consideration by the NSW Planning Department is the northern tower of the development, at 26-30 Mann St.

The DA calls for the construction of a 25-storey (26 level) mixed-use building, comprising retail space, 136 apartments and four parking levels for 181 cars, at a cost of $56.7M.

A Statement of Environmental Effects (SEE) supplied with the DA says the northern tower will transform a currently dormant parcel of land, providing a positive redevelopment outcome for Gosford City Centre.

“The tower will deliver high-quality residential dwellings in a convenient, accessible and naturally beautiful location,” it says.

“The project will catalyse the urban renewal of a key site in Gosford City Centre,” it says.

The site has been sitting vacant since the decommissioning of the Former Gosford Public School more than five years ago.

The project is expected to generate around $50M of direct expenditure to the local region and state over the development period, set to commence in January, 2022, which will provide 105 direct and 159 indirect jobs over one year.

Once complete the project is expected to generate $4.9M in additional retail spending within the city centre, supporting the growth of local businesses.

Submissions received to date offer varying opinions, with several challenging the height of the proposed tower.

“There are many, many residents who will be impacted by a building of this massive height size; it is overkill for the main street of Gosford,” one submission says.

Such a tall building, it says will impact views for residents behind it and make Mann St look “ridiculous”.

Another submission says buildings of such height should not be built so close to the waterfront.

“There should be a sensible height restriction on all buildings of 4-5 storeys in Gosford if we want to save its natural beauty,” it says.

“I have recently moved to Gosford from Sydney to escape such disastrous architecture.”

Another submission expresses concern that existing infrastructure will be insufficient to support an influx of residents in the new building.

“All one has to do is drive a car onto Racecourse Rd or Mann St during peak hour to see that there are going to be huge issues in the future if nothing is done, let alone the bottle neck that is East Gosford to name just one.”

But others see the development as a positive thing for the CBD.

“This is great news for Gosford; at 25 storeys (it) is equal in height to existing buildings high up on Henry Parry Dr,” one submission says.

“This project will create many jobs and give residents great views and its retail podium will activate the area.

“This is all part of the big picture and future Gosford is looking bright.”

Another submission says it is a “welcome new project”.

“The site is in a great spot, the building looks good, finally the ugly council building will be over-shadowed,” it says.