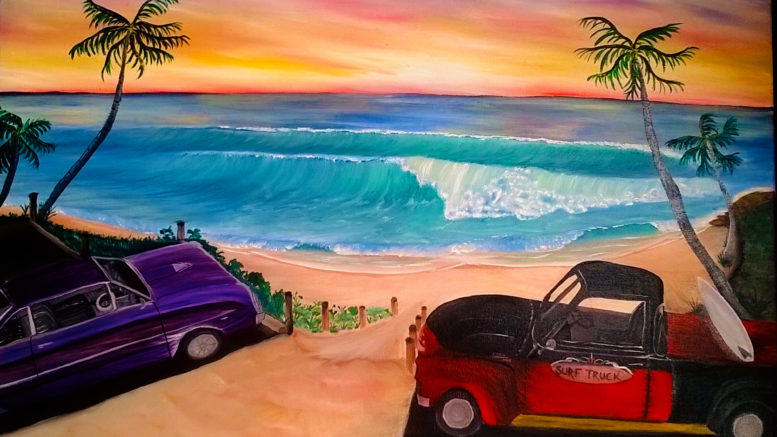 Tumbi Umbi based artist, Carmen Jackson, is being recognised on a national scale for her artwork on the television show, Colour In Your Life, with Graeme Stevenson.

Jackson, who specialises in oil paintings, primarily of landscapes, will be filming an episode with the creator and host on June 5.

“It’s a really exciting opportunity, I was approached by the producers on Facebook, and they started messaging me to see if I was interested, so they’re coming down on June 5 to film an episode with me.” Jackson said.

The television show Colour In Your Life was started by Master Artist, Graeme Stevenson, and has clocked up over 100 million views across a range of networks and platforms including Youtube, Sky Arts, Prime Video and international networks such as Virgin Media, Hope Channel New Zealand, Ireland’s NVTV, BBC iPlayer, and many networks across America.

“I can’t even describe in words how it feels to be recognised for my artwork and I am really excited to be representing the Coast through my artwork.” Jackson said.

The local artist, who is also a Primary School teacher at Brooke Avenue Public School, paints landscapes of the beaches as well as the rolling deserts of Western NSW in all kinds of styles including abstract and absurdist.

Her work commonly focuses on elements of horizon, geometry, textures, and iconic images and landmarks, commonly painting locations such as The Entrance and Terrigal.

“I paint the local beaches, but I’m also a bit of a quirky painter, I like to put some humour into my work and throwing in visual illusions.

“I really love painting all of our beautiful beaches and the landscapes around White Cliffs in western NSW.” Jackson said.

After loosing some family members, painting for Jackson became a form of therapy to deal with the grief that she faced, which soon turned into a passion.

Along with the TV appearance, Jackson has showcased her work in various exhibitions across the country such as the Clare Art Show in South Australia, Moonee Valley Art Show in North Park Mansion Victoria, Bendigo Art Show, and Flemington Art Show.

She has even been featured as a Wynne Art Prize at the NSW Art Gallery, where her piece called The Awakening is currently on display.

Nearly 300 episodes have now been produced by the team at Colour In Your Life, and the TV show is viewed by audiences of over 100 million through online streaming platforms in over 50 countries.

The TV show features artists in their studio teaching the audience how to paint.

“It’s a bit like a cooking show but for artists.” Stevenson said.