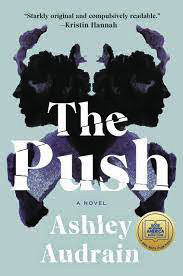 Blyth is standing outside looking into a house to observe the family inside.

The family consists of a father, a mother and two children, one a girl and the other a young boy.

It is Christmas time.

It sounds like Blythe often stares into this particular house to observe the occupants.

We find out that the girl inside the house is her daughter, their daughter.

And Blyth is writing this down, so you know her side of the story.

Blyth is from a line of damaged women and fractured families.

First there is her grandmother, Etta.

Etta made the mistake of falling in love with Louis, a doctor’s son, but her father wanted Etta to marry a man of the land.

Louis loved Etta so much that he gave up his dream of becoming a doctor and put the money he had saved for medical school in a jar to start a college fund for their children.

Unfortunately, Louis was not made for the land.

At first, Etta wasn’t able to care for the infant Ceclia because she was too deep into depression, so that task was left to Etta’s mother.

But Etta eventually met Henry and he adored Ceclia, “she tried hard to be the woman she was expected to be. A good wife. A good mother. Everything seemed like it would be just fine.”

Ceclia grew up with little love from her mother.

She learned to be quiet so she wouldn’t draw Etta’s ire.

Henry was losing control of the situation and asked his sister to move in the help out, as it became clear, “Etta was slipping away.”

Ceclia spent a lot of time in the library with the dream of becoming a poet.

When Cecilia turns 18 and she moves to the city and because she is attractive draws the eye of several young men.

She gets pregnant, “as quickly as she found the city, she lost it”.

She didn’t want to be a mother, she felt trapped.

Blythe had a troubled childhood but thought things would turn around when she met Fox, while they were both attending College.

Life was good until she gave birth to Violet.

Blythe wasn’t the doting mother that Fox expected her to be and Violet was a difficult infant.

There was a lack of connection. “I felt like the only mother in the world … who looked down at her daughter and thought, Please go away.”

Blythe thinks there is something wrong with Violet.

Fox thinks there is something wrong with Blythe.

But then Sam is born, and he is a sweet boy and easy infant, and Blythe finds the connection that was lacking with Violet

How can a mother have these feelings about her own child?

And how can she tell anyone without looking like a monster.

I thought this was a powerful book with some strong characters.

The tone was tense and dark and the subject matter was difficult to read about at times.

The back stories about Etta and Ceclia were especially interesting.

Blythe could be a bit much at times, but heck, look where she came from.

Book Review – The Beauty in Breaking