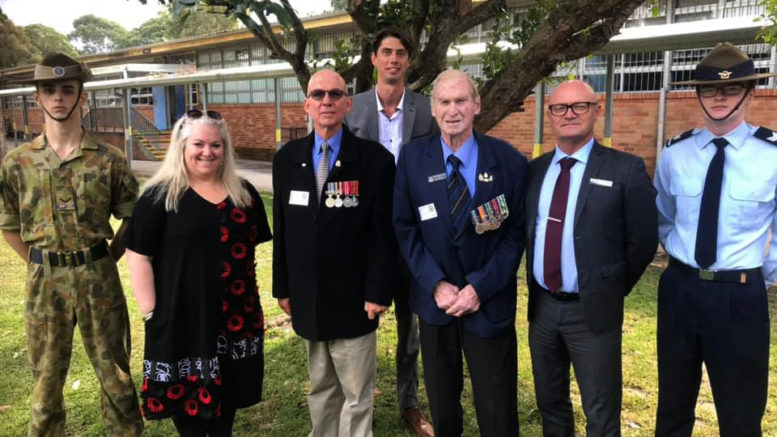 Bevan Router (3rd from right) and Ian Weekley (3rd from left) and others, at the Brisbane Water Secondary College Woy Woy’s Anzac Service

A Woy Woy veteran has been recognised for his decades of service with a Life Membership award at an Anzac Day service at Ettalong Diggers on April 25.

The Life Membership, awarded by RSL Australia, and is one of the organisation’s highest honours that can be bestowed upon a Service Member of the League.

Since joining the Royal Australian Navy (RAN) in 1967, Router has dedicated his life to the servicemen and women of Australia.

Router first helped escort troops to Vietnam on the HMAS Anzac, before he was thrust into the line of fire on the HMAS Hobart in 1970, before bringing troops home on the HMAS Sydney in 1971, to be discharged from the RAN two years later.

Since joining the RSL in 1992, Router has gone on to take on a variety of roles including welfare officer, Vice President, and now as President of the Woy Woy Ettalong-Hardy’s Bay sub-branch, where he has been for the last 16 years.

Router said he was honoured to accept the award which is a commendation of his 29 years of service to the RSL.

“It’s a great honour when you get awarded something like that,” Router said.

“You have to be recommended for the award by your local subbranch so to have their support is humbling.

“When you’re in the services, you make friends and have comradeship and that’s part of the RSL community.”

Router also talked about the importance of celebrating Anzac Day each year.

“Anzac Day is a very sacred day – what happened in1915 was unbelievable, what the Australian soldiers did …” Router added.

“We couldn’t have the service at Woy Woy this year due to regulations, but we are very appreciative of the Ettalong Diggers for having us there.”

Router was presented with his award on the day by a representative of Senator Deborah O’Neill, and was also a guest of honour at Brisbane Water Secondary College Woy Woy’s Anzac Service earlier last week.

Secretary of the sub-branch, Ian Weekley, said the entire branch was proud of Bevan and his achievement.

“The Sub-branch is proud and appreciative of [Bevan’s] long service to the RSL,” Weekley said.

“His care and concern for the welfare and wellbeing of ex-service women and men is in [the] finest traditions of the Navy.”