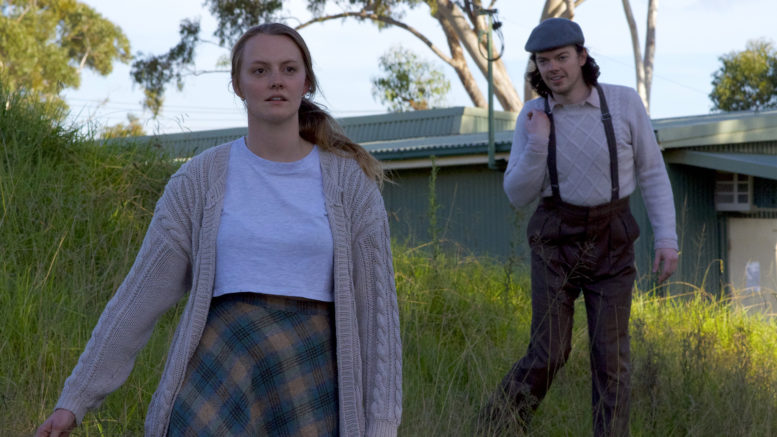 Aimee Honor-Eltham as Helen, and Robert Snars as Billy in The Cripple of Inishmaan

Local actress, Aimee Honor Eltham, is making moves in the world of acting as she has landed the role of Helen in The Cripple of Inishmaan.

The play starts on June 4 and is showing at the Pavilion Theatre in Castle Hill until June 26.

The Entrance local made her stage debut in 2016, playing Elizabeth Bennet in Pride and Prejudice, and since then she has appeared as Lady Capulet in Romeo and Juliet, Kirstie in Worm Farming and The Little Mermaid in Disenchanted.

“I saw that the Pavilion Theatre posted an audition notice for The Cripple of Inishmaan before COVID and I really fell in love with the script and the character of Helen.

I made the mistake of falling in love with Helen before I even auditioned, so thankfully, I landed the role.” said Honor-Eltham.

In The Cripple of Inishmaan, Honor-Eltham’s character is Helen, who bullies the protagonist Billy, and considers herself to be the prettiest girl in Ireland.

Honor Eltham describes her character as a fierce and protective girl who shows her affection in a strange way.

“She’s definitely a bully but she means well, she is definitely horrible to Billy, but one of the best things about her is that it is a protective barrier, and her heart is in the right place.

“Helen is probably my favourite roll yet, it’s really fun playing her as she is very different from me so it’s been a fun challenge getting into her character… she also loves to throw eggs at people, so I get to throw a lot of eggs in this show,” Honor-Eltham said.

Outside of acting, Honor-Eltham enjoys letting her creative energy flow, by making short films with her friends.

The actress also enjoys designing costumes and she has even created Helen’s costume for The Cripple of Inishmaan.

She also runs her own children’s entertainment company that specializes in parties and events.

For this, she dresses up as characters and runs activities such as facepainting.

“Most weekends, I’m usually dressed up as Elsa from the Disney movie Frozen which everyone loves… most of the children are either starstruck or they come bolting straight towards me for a hug.” Honour-Eltham said.

She is also working on taking her career to the next level, as she has recently hired an agent.

Locals to star in The Credeaux Canvas