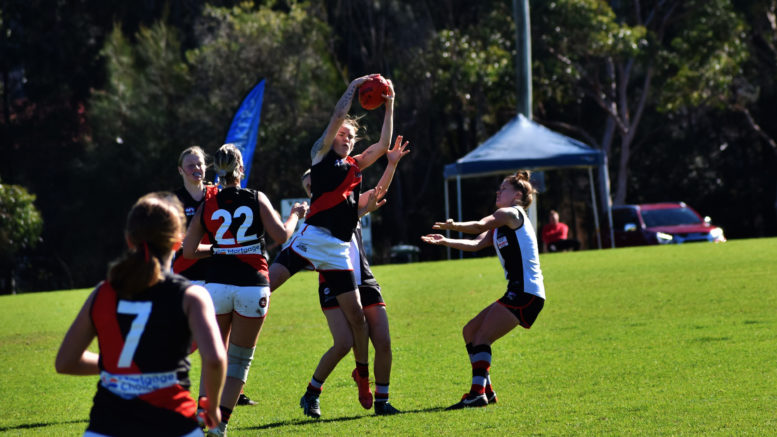 In the top of the table clashes between the Killarney Vale Bombers and the Terrigal Avoca Panthers, in both the Black Diamond Cup Women’s and Men’s leagues, the southern side has come away with wins.

Played at Hylton Moore Oval on Saturday, May 15, the women played first in a windy 9am contest wherein the Panthers eluded their opponents until the end, finishing with a 40 – 18 result.

It was Killarney Vale’s, Kelsey Acton, who scored the opening goal, although these were the only points the team would get in the first half.

Kirstie Hutton soon returned with the first goal for the Panthers and throughout the game she went on to post three more.

By the end of the third quarter, the Bombers had dragged themselves back to within striking distance of the lead, scoring two more goals to trail the Panthers by 13 points.

In the final quarter, the southern side pulled away with a further nine points to take the win.

For Terrigal Avoca Head Coach, Joel Patterson, the win has instilled confidence in his team ahead of a difficult upcoming Round Seven.

“It was a great physical battle, as it always is against Killarney, given they’re a very strong team in the competition,” he said.

“Our team were very hungry to get a win, we put in a strong first half and got a couple of goals on the board.

“We knew they were always going to come back, we addressed that at half time, and they did in the third quarter, but we had the ability to stay composed in the final quarter.

“We also have been working on our fitness, so physically, we were able to keep up and control the contest better than we usually do.”

Patterson pointed to his team’s Ruck, Karina Brown, as being crucial to securing the win.

“With the heavy wind there were a lot of stoppages that slowed down the play, so her ability to win a lot of the contests helped us in our ability to get the ball forward.

“At the other end, we shut them down with some good intercepts off the half back line and we were able to utilise our running game and get a lot more entry into the forward 50.”

Now, the Panthers face the league leaders, Cardiff, who are undefeated this season.

“Cardiff are a very strong and tall team, they’ve got a lot of good fitness and running players.

“For us, we have to improve on our contest work because that’s where they dominated us last time.

“As long as we show up and are able to run with them, we will be ready to compete against them.”

The Bombers will next face Warners Bay, the wooden spoon so far this season, and will look to the opportunity to bounce back from their loss and potentially overtake the Panthers on the ladder.

At 3:00 pm, the Men’s teams took to the field with the wind still blowing strong, and by the end of play, the Panthers had come away with another win, this time by 77 – 25.

The game play was hard fought from the start, although the cracks showed early in Killarney’s discipline when they gave away two 50 metre penalties that led directly to goals, giving the Panthers a 13 point lead at first quarter time.

Terrigal continued to push their advantage through to the end of the first half, getting ahead to a 49 – 14 point lead.

In the third quarter, the Bombers came back with a newfound composure on the ball and in defence, and scored themselves to within five goals of tying up the score.

Yet in the final quarter, four unanswered goals for the Panthers took the lead out to a very dominant 52 points, sending the Bombers home with plenty to think about.

For Bombers Head Coach, Corey Shackleton, his team lost because they were unable to enact the discipline and composure that was crucial to their game plan.

“We knew we had to be very disciplined and execute all the fundamentals, but we didn’t,” he said.

“Terrigal were really well structured, they set up well behind the ball, dropped numbers back and we just kept playing into their hands, continued with the ill-discipline, gave away eleven 50 metre penalties, six of which led directly to goals, and by the time we got to half time they game was probably beyond us.

“There were a few things we wanted to change in the second half and we actually outscored them the third quarter.

“We were better with our ball use, we started to have a bit more composure with the footy instead of just blazing away.”

Despite having a few good take away points from the match, Shackleton acknowledges that his team will have to lift going forward this season.

“We’ve got to win the games that we need to win and hope we can put together some good footy against the two top teams: Newcastle City and Terrigal.

“If we can get a win against them with what’s left of the season, we may finish second, otherwise we have to aim for third, then be in good shape come finals, which is when the real footy starts.”

After the upcoming week of representative fixtures, the Bombers men will return to play Warners Bay as well as the women.

Meanwhile, Terrigal Avoca men will face Cardiff in a game that they are favourites to win.