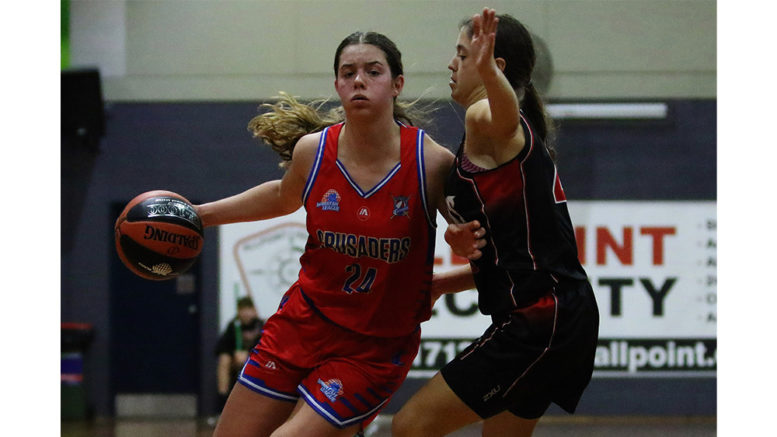 Coming up against the North Bears, the Crusaders two youth teams came away with the Waratah League 1 points, with the Youth Women’s posting a phenomenal 72 – 43 win over last year’s grand finalists and the Youth Men’s pulling away to secure an 81 – 74 win.

The opens teams did not fare as well, with the Women’s falling 20 points behind in a 55 – 75 loss and the Men’s coming within a grasp of the lead before ultimately falling short 82 – 84 in a tense game.

For the Youth Women’s head coach, Will Granger, the win reflected the girls’ willingness to make the unselfish plays, fast breaks and well executed rebounds against their opposition.

Sara Matthews led the way on the score sheet with 20 points, closely followed by Samantha McCubbins on 14 and Paris Forcadilla on 12 thanks to four three-pointers.

For the Youth Men’s, the win came as a welcome reprieve after two consecutive losses to start the season and the team will look to build off this result going forward.

Head Coach, Mikko von Lueders pointed to his team’s discipline at the line with almost double the free throws as a key factor in the win.

Four of the boys scored double digit points, led by Isaac Woller who finished on 19.

“We’ll have a tough practice this week to really solidify that this is who we are from now,” von Lueders said.

For the Women’s, their 20 point loss came largely as a result of their inability to capitalise at the free throw line, despite a dominant performance from Sara Matthews who stepped up from the Youth team to record 21 points and 14 rebounds for the game.

Captain, Jonalyn Wittwer said her team executed their game plan well but did not match up to their opposition in some areas.

“They shot well from behind the three, but we were giving that up, so I guess it’s one of things where it’s a double edged sword and obviously in the end we are the ones who are hurt from it.

“We definitely had some good moments, especially defensively.

“As a team we stuck with it, kept going and kept after it, so I think it’s now about putting it all together on both the defence and offensive ends, and that’s something we’re going to chip away at training this week.”

The narrow loss by the Men’s team, compounded by the return of Jayden Hodgson in a Bears jersey, had the large crowd on the edge of their seats.

Coach Jarred Scoines pointed to another stellar performance from Jacob Cracknell who netted himself 14 points, seven rebounds and three assists, and Thomas Akamarmoi who led his team with 26 points and five boards.

“When we go back to look at the tape and see how we went this week as opposed to last week, there’s some real positives to take on board,” concluded Scoines.

This Saturday, April 24, the Crusaders will all come up against the Maitland Mustangs at Breakers Stadium, from 12pm to 6pm.

Brekkie & B-ball Club is back