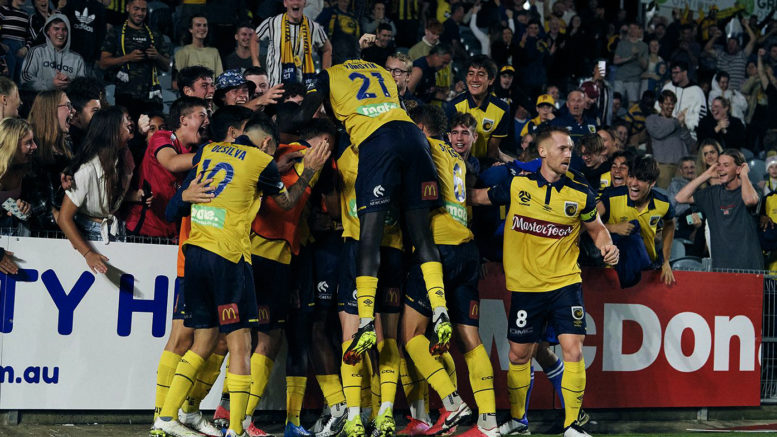 In the eerie silence of Central Coast Stadium, deep in the second half, just after Oliver Bozanic missed the Mariners second penalty, a faint sound could be heard.

A sound that has not been heard in these lands for many years, coming from somewhere behind the northern goal.

Slowly, it grew in volume.

The call of the yellow army.

“Who do we sing for?” it asked of the die-hards in the eastern stand.

“We sing for yellow,” came the reply.

And slowly, from the depths of despair at 0-1 down to Adelaide United, the Coast’s boys in yellow lifted.

In front of a 5,000 strong crowd, a deftness returned to the short passing, a fluidity to the though ball.

Stessness, Rowles and Clisby were everywhere, both sides of the ground, blocking shots, building a wall.

For most of the game, it seemed the soccer gods were against the Mariners.

Early in the first half, Urena fired a shot hard at the bottom left corner only to be denied by a desperate lunge from United keeper Joe Gauci.

Shortly thereafter, a Bozanic cross struck the hand of Adelaide’s Craig Goodwin and the VAR awarded the Mariners a penalty.

Simon took the spot-kick but was foiled again by a desperate saved from Gauci.

It was not to be his last.

A few minutes, a header from Simon found the net but the linesman’s flag went up for an off-side and the goal was overturned.

A Stefan Nigro header then beat Gauci only to be blocked on the line by defender Jordan Elsey.

Early in the second half, against the run of play, Adelaide’s Ben Halloran drove down the right wing and found Kusini Yengi in enough space to squeeze a shot underneath Mariners keeper Mark Birighitti.

At the 60 minute mark, the Mariners dominance was again rewarded with a second VAR penalty for another Adelaide hand-ball.

This time, it was Bozanic who fired away but, for the second time of the night, Gauci was able to deflect it clear.

It was the low point of the night for the blue and yellow.

And enter the Mariners super-subs – Josh Nisbet and Alou Kuol along with local dynamo Matt Hatch – and the tempo lifted.

It was Bozanic who struck first.

Incensed by his earlier miss, Bozanic latched onto a pass outside the box, worked his way through a river of United defenders and rifled it through an opening into the bottom left hand corner of the net.

The magic of Joe Gauci had finally run out.

With the momentum building and sound of the yellow army reaching a fever pitch, Josh Nisbet produced some of his own magic, seizing on a deflection from Gauci, threading it along the goal line before spotting the scintillating Kuol looming up unmarked in front of goal.

Kuol punched the ball into the net, leapt the barricades and flung himself into the mosh-pit of the adoring yellow army.

Ten Mariners players followed and for the next 60 seconds, the clock stopped as the northern end of the Stadium pulsed with jubilation, with a memory and with a small seed of hope.

The win snaps a 3-match winless streak, including a lacklustre draw with Melbourne Victory last week and puts four points between the Mariners (29) and second placed Adelaide (25) on the ladder.

An upset loss by Melbourne City to Western United earlier in the evening also checked City’s advance on the table, leaving them on 24 points, albeit with two games in hand.

The Mariners will now take on Western Sydney at Bankwest on Tuesday night, April 5, with their next home match set for April 24 against Sydney F.C.

Soccer gods be silent … there be a new religion here.

Worrying times for the Mariners

Be the first to comment on "We sing for yellow"