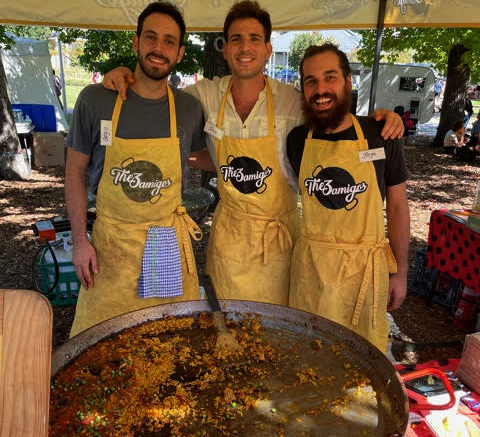 Sergio, Julio and Jorge from The 3 Amigos discussed the wide variety of vegan food available

Hundreds of residents gathered at Kibble Park in Gosford on Sunday, March 28, to browse through a wide range of vegan-based stalls.

The very first Vegan NSW Alive Festival event hosted a series of talks and live music session throughout the day, as people gathered around the bandstand sheltering from the sun.

Over 70 stalls were on offer ranging from cruelty-free clothing, homewares and eco products, to plants, personal care products and plant-based cuisine.

Stacey Abdilla, owner of the Little Vegan Make Up Shop stall, said she was surprised at the turnout at the event.

“I love the markets … we sell a variety of different brands of vegan and cruelty-free products, including palettes, masks, foundation, mascara, and lipstick,” Abdilla said.

“I’m a make-up artist and I realised there were so many products that weren’t vegan or were tested on animals, so I wanted to make a shop which resolved that.”

Abdilla said she has been vegan for seven years and found the transition to be a smooth process.

“It’s easier now – veganism is becoming more mainstream so its heaps easier for people to try it out for the first time,” she said.

“It’s an instance of swapping out products, moving away from your usual favourites and giving the vegan alternative a try.”

Seonaidh Murphy said she usually hosts a stall at the Sydney vegan markets and hopes to encourage people to make the change to a plant-based lifestyle.

“Our brand has always been about sustainability, so veganism has gone hand in hand with that,” Murphy said.

“I think it’s a gradual process of working out what is suitable to you, and then picking out a few items that you can replace.

“It has to suit your lifestyle otherwise you’re not going to use it.”

For those feeling a little hungry after wandering around the stalls, a long line of eateries was on offer, ranging from Mexican and Thai to bakeries, pasta and paella.

Jorge Spinola and Julio Balderrama from The 3 Amigos, a plant-based paella stall, said their business aims to respect the environment.

“We are proving to everyone that it is completely possible to have nice and tasty vegan food – you can find any food alternative,” Balderrama said.

“It’s been three years since we started this and it’s like a hobby where people can come and try our traditions,” Spinola said.

“Everyone can enjoy a little bit of Spain!”

Woy Woy’s Sandra Mayor was one of the hundreds attending Saturday’s event, donning a colourful frock made of tea towels.

Mayor said she was keen to drink, eat and learn her way through the markets as she is “just totally about the plant-based lifestyle”.

“I’m not totally vegan yet, but I’m wanting to get there, so I’m here to learn and explore,” Mayor said.

“It’s been a process over a number of years [and] these gorgeous foods are much nicer than the ones before.”

The next Vegan NSW Alive Festival will be able held at Kibble Park on September 25.