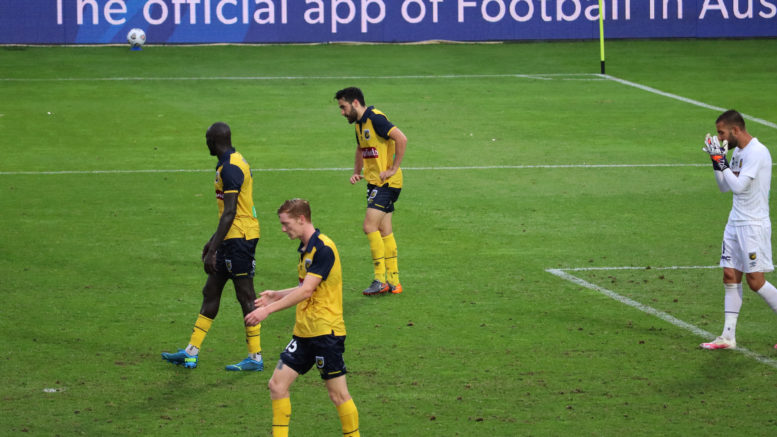 The Central Coast Mariners’ lead atop the A-League table has been overthrown by the game in hand Melbourne City, after a 1-0 loss to Western United on Saturday evening, April 17.

The Mariners travelled to Tasmania to play their own, as well as the league’s, second fixture at University of Tasmania Stadium, coming up against a Western United side which has logged a poor record against New South Wales teams in 2021.

On this day, it was the fifth minute opener from Western’s Connor Pain that remained to be the winning goal at the end of 90 minutes.

The one-two move put together between Pain and Besart Berisha made clean work of cutting the Mariners’ defence in two, down the middle, with a final outside foot clip catching goalkeeper, Mark Birighitti off-guard.

The Mariners’ defensive line was beaten once again late on in the first half through a well-placed early, inside foot cross from Alessandro Diamanti, finding striker, Guarrotxena, unmarked on the penalty spot.

Although Guarrotxena’s shot was fired directly at Birighitti, who had to be quick to lower his torso and obstruct the ball rolling through his legs, the attempt highlighted the vulnerability of the Mariners’ back line when opposition midfield players have room to play uncontested.

In attack, the Mariners’ play was well stifled by Western, who worked hard to undercut the service to the starting front men, Matt Simon and Marcos Ureña.

One first half opportunity did arise in added time on the end of a precise through ball placed by Michal Janota from out of the box to Daniel Bouman on the edge of the goal area.

Moving slowly, the ball found the gap in between the Western defence, yet positioned Bouman slightly too close to goalkeeper, Ryan Scott, to get the ball up and over.

The second half continued similar to the end of the first, with the Mariners finding a slight current of momentum that saw them control more of the game.

A foul by Ruon Tongyik nearly saw him earn himself a second yellow and a red card for obstructing Pain’s run into space down the wing, but a VAR checked offside cancelled out referee, Alireza Fagahani’s call.

An immediate influx of energy came into the Mariners’ attacking third with the entrance of Alou Kuol in the 69th minute, yet despite finding himself with the ball at his boots in front of goal numerous times, the young talent couldn’t find the net.

The closest call for the Mariners came from captain, Oliver Bozanic, with an out of box strike that skimmed over the crossbar in the 75th minute.

Working his way around Víctor Sánchez with an outside foot feint back onto the inside, Bozanic found himself in space a long distance away, yet his hard driven shot was unable to kickstart his team back into the game.

In the end, it was a disappointing match for the Mariners who have yet to find consistent form this season away from home.

For a squad that have found great cohesion in their interplay together this season, making this resonate with the scoreboard early is one way of ensuring more will come.

As manager, Alen Stajcic noted in the post match press conference, if his team had scored one, he was sure they would have scored more.

This is only the third match this season where they have not scored a single goal.

However, with the two next games scheduled at Central Coast Stadium, first between Sydney FC on Saturday, April 24, then Brisbane Roar the following Wednesday, April 28, the Mariners will look to maintain their home field dominance to keep in the running for the league win.