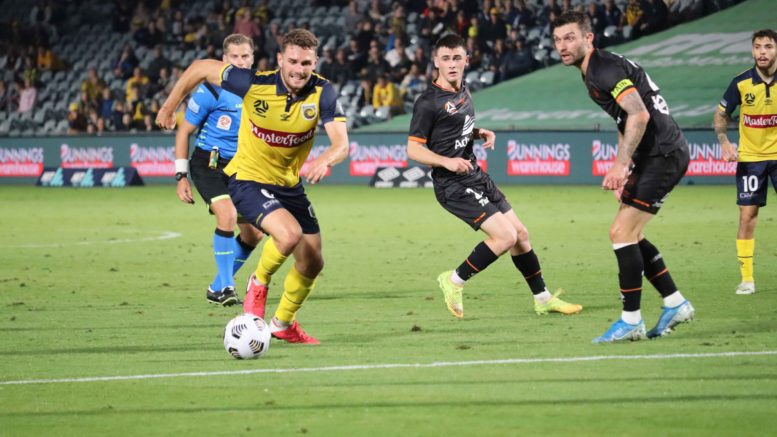 Central Coast Mariners have suffered a heavy 4-0 defeat against Brisbane Roar at Central Coast Stadium on Wednesday, April 28, putting an end to their run of seven games without a loss at home. The team’s goal scoring form enjoyed in their recent match against Sydney FC dispensed in the face of their mid-week opposition, a team they now lost to 19 times in a row.

Yet the loss was anything but expected for the home teams fans who have witnessed the remarkable come back from the Mariners this season so far. Now having dropped down to third on the A-League ladder, with a number of teams still holding games in hand on them, the Mariners now face the potential of falling out of the top six come the end of the season.

The Round 18 fixture saw the visitors come out strong with a robust defensive line-up in Jack Hingert, Scott Neville, Macaulay Gillesphey and Joshua Brindell-South. The Mariners found it difficult to break them down in the early stages of the game, unable to post an early goal as they did on Saturday against Sydney.

In the 19th minute, Gillesphey scored for Roar, beginning the match’s shift in fortunes in the favour of the away team. After retaining the ball from their own corner, Roar got the ball back out wide to Jay O’Shea, who swung it in to the box. A touch off Jack Clisby’s head lobbed the ball high over the players on front of goal and brought it out to Gillesphey unmarked on the far post, who volleyed the ball well beyond Mariners keeper, Mark Birighitti’s reach.

With the visitors up by one goal, the Mariners began straight away had an opportunity to equalise after a forward moving play had Marcos Ureña cross the ball into Clisby, only to have Hingert block it with the side of his body.

Referee, Alex King, initially gave a penalty to the Mariners, but a VAR check ended in the decision overturned.

One last chance on goal fell to Joshua Nisbet before the end of the first half, who found himself in space ahead of goal outside the box, and his low shot brought a loud cheer from the far-off fans. The crowd fell back into silence shortly thereafter when a replay on screen showed the ball skidding just to the outside of the post. However, this would end up being the best chance for the Mariners all night.

10 minutes into the second half, Roar were able to double their lead with a fantastic strike from Joey Champness to beat Birighitti on the inside post. Benefitting from a well placed cross-field lobbed ball by O’Shea, Champness worked the space from out wide back in on goal until his shoulders were positioned perpendicular against the goal and his side-footed strike flew from outside the box and skimmed the post as it went into the net.

This second goal set in motion a decline in game-day form from the boys in yellow who have been difficult to dishearten this season. Yet a red card shown to Ureña five minutes after the goal seemed to take the urgency out of the Mariners’ play. The initial yellow card was replaced with a red after a VAR check found Ureña to have applied downward pressure with his studs onto the top of O’Shea’s foot. With ten men left on the field, the situation was looking dire.

The game remained balanced as it was for the next 20 minutes and the Mariners did find opportunities to advance on gaol despite the one man deficit. However, the same lack of shooting accuracy plagued the boys in yellow all the way through this match and their much more clinical opposition pushed ahead to break Central Coast hearts.

The final two goals of the game sealed the three points for Roar, the first coming in the 87th minute on the break after a bout of Mariners upfield possession. Gianni Stensness was dispossessed at backside of the Mariners formation, giving to the quick moving Roar attack a three on two chance. Alex Parsons matched up against Kye Rowles and managed to swing the ball back on his inside and get away a curler that swung beyond Birghitti.

In stoppage time, the tiring Mariners defence let another one in after Jaden Casella allowed the space to Neville on the wing. The right back low crossed the ball in with his first touch and found the advancing foot of Masato Kudo that appeared in between Rowles and Ruon Tongyik.

After taking a serious blow to their chances of finishing in the top two come the end of the season, taking only one from six points in the last two games at home, the Mariners will now look to take stock and prepare for Sunday’s clash against Melbourne Victory at AAMI Park, kick off 4:05pm.