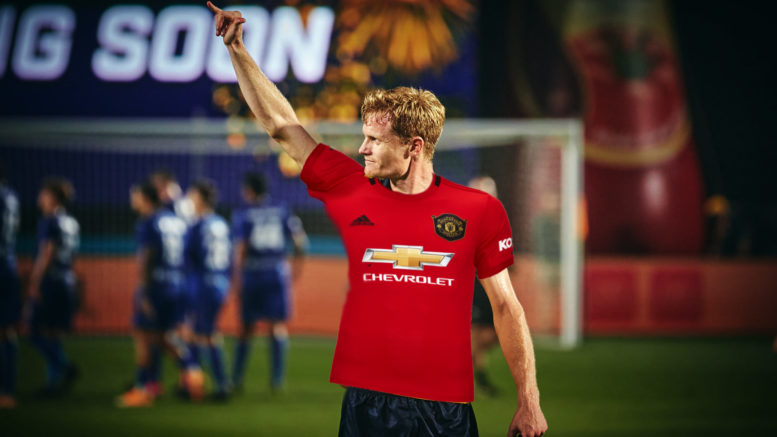 Could Matt Simon don the red? [This image has been altered and created to illustrate the story]

On Tuesday, the Sydney Morning Herald reported that international footballing giants, Manchester United FC, were in talks to purchase Central Coast Mariners in a move that would relocate the club to Sydney.

According to the Herald, the club has held ‘lengthy discussions’ with Mariners owner Mike Charlesworth in a bid to turn the Gosford-based team into a ‘sister club’ of the Red Devils.

But has the Herald jumped the gun on this one?

Despite this season’s successful run at the top of the A-League ladder, the Mariners have been struggling off the field, with financial issues plaguing the long-term future of the Club.

Charlesworth announced last August that he would look for a new investor after being involved with the Club for over a decade.

And so, it would make sense that Club was in official talks with a potential owner.

However, the announcement may need to be taken with a grain of salt considering this is the third time speculation has surrounded the club’s future, most recently with Sydney-based investor Abdul Helou in September.

Accordingly, CCN reached out to both clubs to help get to the bottom of the story, with the Mariners CEO Shaun Mielekamp describing the reports as ‘just noise’.

“The Chairman has held discussions with a number of clubs and interested parties across a number of years regarding the sale of the club,” Mielekamp said.

“Speculation is nothing more than speculation.”

“Reports like this simply serve as a means of distraction from what is a positive season on the field, and the club will make no further comment on the matter.”

No matter who ends up signing on the dotted line, the sale of the A-League licence would be subject to approval from Football Australia and would need to gain majority support from fellow A-League clubs.

However, reports suggest several clubs are already in support of a potential ‘Manchester United deal’, ultimately hoping that it will increase the level of interest, and therefore investment, into the League.

Interestingly, the CEO of Football Australia, James Johnson, gave a tacit endorsement of the potential deal at a press conference on Tuesday.

“It would be exciting, wouldn’t it, to have a brand like Man United involved in our sport,” Johnson said.

If the reports prove true, the proposed takeover could come at an expense for Mariners fans with reports that the Club would be relocated south, with home games likely to be held at Brookvale or at North Sydney.

As the news broke, some fans were left aghast at the thought of their home club moving to away from Gosford.

Mariners fan and local, Jessica Vella, said moving the club would prove to be a massive mistake as ‘there’s no room for another A-League club in Sydney’.

“[The] Mariners have an identity – they’re built on being a club for the community [so] what happens if you strip the community from the club?” Vella said.

“I definitely wouldn’t travel [to Sydney] – it’s just unrealistic to go so far every couple of weeks, especially with two young kids.”

Hill said if the team were to relocate south, he would not attend any home games as ‘they wouldn’t be his team anymore’.

“Surely its more expensive to run a club in Sydney than here – I don’t think money is made from game receipts these days, it’s made from TV deals and sponsorships.

“It’s unfortunate these reports have come at this time in the season – we don’t really want the team to be disrupted.

“They’re the Central Coast Mariners – they have to stay here.”

Even the local pollies shared their concerns about the club’s possible move down to Sydney.

As a longtime fan of both Manchester United and the Mariners, Member for Wyong, David Harris, said he was in a bit of a pickle over the potential takeover.

“If the reports are true, I don’t mind the financial side of the deal but I’m a bit concerned by the possible rebranding of the club,” Harris said.

“It would be fantastic to have the financial backing to be able to have young players on loan here, and as a great pathway for our own footballers.

“The Mariners have demonstrated they can be successful, and their Central Coast Academy is second to none.

“But the [Club] will also lose a lot of support from the Coast if they move … the sad part is the Club will lose its identity.”

And in a show of bipartisanship, Parliamentary Secretary for the Central Coast Adam Crouch, agrees in that the move would be a setback for the Coast community.

“The Greater Sydney region is already home to two A League teams, and the 350,000 people in the Central Coast region deserve to have their own A League team,” Crouch said.

“I would urge the Mariners to support local fans and local talent by remaining on the Central Coast.”

Yesterday’s reports suggest the Red Devils are keen to follow in the footsteps of cross-city rivals, Manchester City, who branched out into the A-League with their rebranding of Melbourne City in 2014.

The Sky Blues purchased 80 per cent of the-then Melbourne Heart side for more than $11 million, later purchasing the remaining 20 per cent and changing both its name and team colours to match their brand.

And with a connection through United’s assistant coach Mike Phelan, who previously held the role of Sporting Director at the Mariners in 2018, there could be a clear goal in mind.

It’s also not as if the Premier League giants are strapped for cash either.

Last year, Forbes listed the Glazer-owned side as the tenth most valuable sporting team in the world, with an estimated net worth of more than $5 billion.

Whatever happens, it will be interesting to see what comes of the Herald’s report – is it all just media hype or is there something more substantial behind these claims.

In the meantime, the Mariners squad is staying focused in their preparation for Saturday’s game against Western United.

The Round 17 fixture will be played at Tasmania’s UTAS Stadium, kick-off 5:05pm.