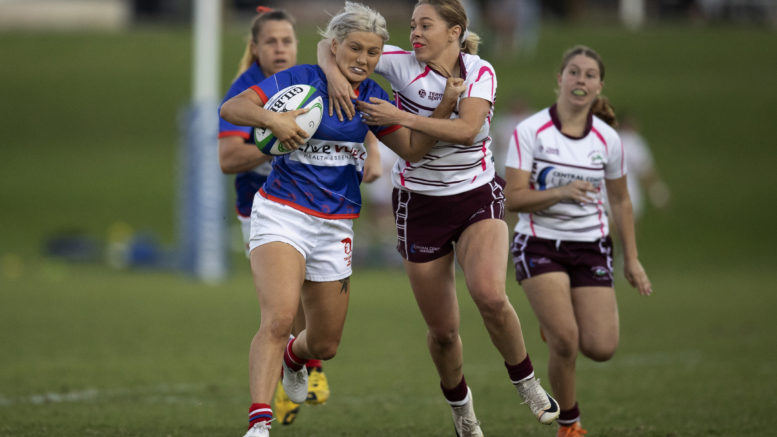 For the Terrigal Trojans, two wins in both the Women’s Tens and the Swietelsky Premier One leagues have launched their 2021 season campaigns off to a great start.

Against the Kariong Wanderers, the Women’s took glory with a very dominant 71 – 7 point win, whereas for the First Grade Men, a five try to four come-from behind victory was hard fought, ending 44 – 29.

Before sundown, the Women’s teams came out to play at the Haven Oval in Terrigal, and the hosts took the opportunity to show off their squad development over the pre-season.

Terrigal co-captain, Prue Bright, commented on her team’s performance and on their opposition, who are still developing as a squad and showing a lot of promise.

“We’ve been working very hard through the off season with a lot of the girls putting in extra effort,” she said.

“As a result, we are starting to put together more structured play under the direction of our coach, David Gee, and assistant coach, Nina Tai.

“The girls were looking forward to the first game of the season after a few pre-season tournaments.

“We went down to Sydney for the Festival of Women’s Rugby, which was a real test of our new game play and skill level.

“We brought everything we learnt down in Sydney back to the Coast and tried to implement fast football up the centre of the field and spreading the ball wide when the opportunity arose.

“We’ve got some very talented girls in our squad, some very good running backs who found a lot of holes on the weekend and made the most of them.

“Kariong are a new team, but they’re led by Inge Visser, an international Dutch player who is currently with the Wallaroos as a Rugby World Cup 2021 coaching intern for Australia.

“They’ve got a lot of potential so we’re going to be looking to them at the back end of this season to see how they develop.”

At the game’s conclusion, woman of the match points were given to Bronte Kirk-Clark and Shenay Ball.

Afterwards, the First Grade Men’s teams took to the field for a match under the floodlights with a very strong supporter turn out spread the whole way around the field.

Over the 80 minutes of play, Terrigal came from behind to win a game that was much tighter than the scoreboard suggested.

The early lead came for the Wanderers, scoring the opening try and holding onto the advantage until a late first half penalty goal brought the half time score to 13 – 12, Trojans ahead.

Kariong regained the lead early in the second half, but Terrigal were soon to take over on the scoreboard with some excellent tries.

With the scores locked at 20 points apiece midway through the second half, the match was there for the taking, and it was Terrigal who finished stronger to secured the victory.

Nonetheless, the reasonably comfortable win was difficult to secure for the hosts who pushed themselves beyond a converted try ahead due to the three penalty goals executed by Adam Danckert,

Best players for Terrigal were Lock Will McDonald, Winger Dan Sargeant and Flanker Sam Kenny. For Kariong, it was Fullback Jake Hubbard, No.8 Logan Campbell and Lock CJ Fonoti.

Looking ahead to Round Two over this weekend, Kariong will return home to host Warnervale who will also be seeking to shake off their first round loss to Hornsby.

Terrigal will travel to Slade Park to be hosted by The Lakes, a repeat of last year’s Grand Final and a contest set to be the match of the day.

Be the first to comment on "Terrigal triumphant in round one"