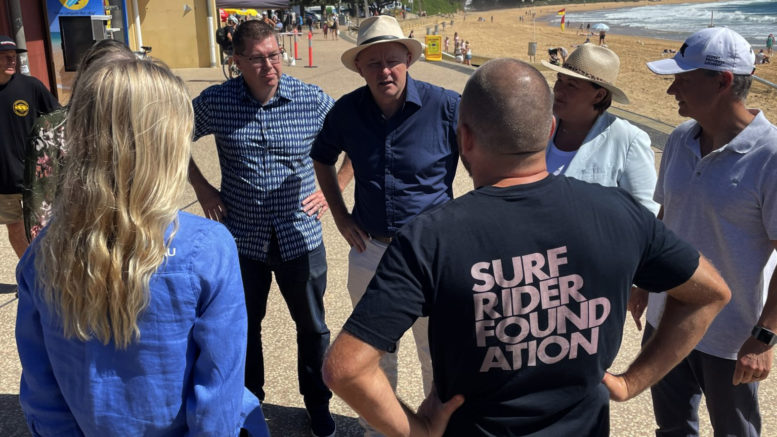 Federal Member for Shortland, Pat Conroy (back left) and Labor Leader, Anthony Albanese, talking to other protestors at a recent rally on the Central Coast

Federal Member for Shortland, Pat Conroy, says the Federal Minister for Resources, Keith Pitt, has let down the community by still not making a decision on the renewal of the PEP11 permit for offshore gas and oil drilling.

Also, a letter to the Minister from Federal Member for Dobell, Emma McBride, on April 12, has still remained unanswered.

“I urge you to bring this matter to a swift conclusion by rejecting the application for an extension,” McBride said in the letter.

Advent Energy’s PEP11 renewal application for the permit, which expired on February 12, would allow oil and gas exploration drilling off the coast from Port Stephens to Sydney for another two years, with an area just off Lake Munmorah as a target site for the Baleen Prospect.

“The licence is currently in a rollover period, meaning that exploration can continue while the Minister makes his decision,” Conroy said.

“It has now been more than two months since the current permit was due to expire.

“At that time, the Minister, who has the final say on whether the permit will be extended, said that he’d prefer the decision was made soon.

“It feels like every man and their dog has said no to the extension of PEP11.

“The ball is firmly in Keith Pitt’s court and there’s absolutely nothing stopping him from ending this uncertainty, listening to the community’s wishes, and saying no to PEP11 once and for all,” Conroy said.

Pressure has been mounting on Federal Resources Minister, Keith Pitt, to make a final decision, especially after Prime Minister, Scott Morrison, announced his opposition to renewing the licence on March 4.

With a recommendation from Deputy Premier, John Barilaro, that the licence not be renewed, and staunch opposition to the permit extension from the NSW Government, the Federal Labor Party, and many Coalition MPs, residents and community groups have been agitating for a speedy decision.

Save Our Coast has been opposing PEP11 for more than three years.

Founder, Dr Natasha Deen, said the group hoped that the Prime Minister would ensure Pitt “heeds the clear wishes of the community” and denies extension of the licence.

The organisation has held several mass rallies opposing the permit, with one at Umina Beach in 2019 attracting 1,800 residents, and 78,000 signatures have been collected on petitions presented to the government calling for the permit’s cancellation.

Members of Surfrider Foundation Australia have also been strong campaigners against the permit extension and on Saturday, April 24, at 11am, surfers will again hold a paddle-out at Terrigal to show their opposition.

McBride said the extension of the permit not only threatened the pristine marine ecosystem of the Coast, but it threatened thousands of tourism, retail and hospitality jobs which depend on the unspoilt natural environment.

“Importantly, the retail, accommodation and food services sectors are the second and third largest employers on the Central Coast,” she said.

“As we emerge from the COVID-19 fuelled recession, our community cannot afford further adverse impact caused by PEP11 upon these important sectors.”

A statement from Federal Member for Robertson, Lucy Wicks, says she has been assured by the Minister that he will give this proposal the detailed consideration it deserves.

“The Prime Minister has said no to the extension of the PEP11 permit and I couldn’t agree with him more,” she said.

“My view on the PEP11 permit remains concrete, I will not support anything that could harm our waterways and precious marine life.

“I will be advocating for the Commonwealth to say no to the decision to extend the PEP11 permit,” Wicks said.