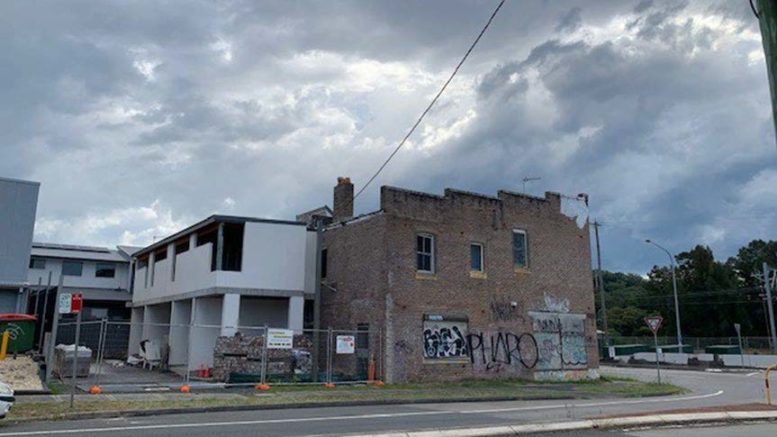 The site being redeveloped

A mixed-use development currently under construction at Woy Woy will be subdivided into three strata lots if a proposal to be considered by the Central Coast Local Planning Panel on April 8 gets the green light.

The site, on the corner of Railway and Charlton Sts, includes a heritage listed building formerly known as Mrs Wilson’s shop and was approved in May 2016 for redevelopement as retail/commercial premises and two residential units.

Applicant Bruce Kerr P/L ‘s application for Stratum Torrens Subdivision of the site into three lots comes with a recommendation for approval from Central Coast Council.

It had been referred to the Local Planning Panel as there is proposed variation to the minimum subdivision lot size development standard of Gosford Local Environmental Plan 2014.

Documents lodged with the application say the new subdivided site would bear a “close relationship” to the approved development and would still see the restoration of the heritage listed building.

But the strata subdivision would allow for better identification of responsibilities for the future management of the site, the documents say.

It would not change the density, layout or external appearance of the redevelopment, but would mean that the heritage designation would apply only to Mrs Wilson’s shop and not to the two new residential units.

The subject site has an area of 472.8sqm and is located on the southern corner of the intersection of Railway and Charlton Sts.

The documents say it is on flat land and subject to flooding, but is not identified as being “bushfire prone land” on Council’s bushfire maps.

The two-storey heritage building is currently being restored and converted for retail and commercial use, with a veranda and two attached side-by-side two-storey residential units as per the 2016 approval.

Vehicular access to the site is provided from Charlton St to car parking via a driveway behind the heritage building and residential units.

The development is considered to be in the public interest and in keeping with the local area, with commercial development to the north-east and south-east and Deepwater Plaza Shopping Centre immediately opposite in Charlton St.

Adjoining land to the south-west is residential and has recently been developed for a five-unit, two-storey multi dwelling housing development, the documents say.

The proposed subdivision also seeks approval for two separate sewer connections for the residential units to the local sewer line in Railway St, in lieu of the shared connection already approved.