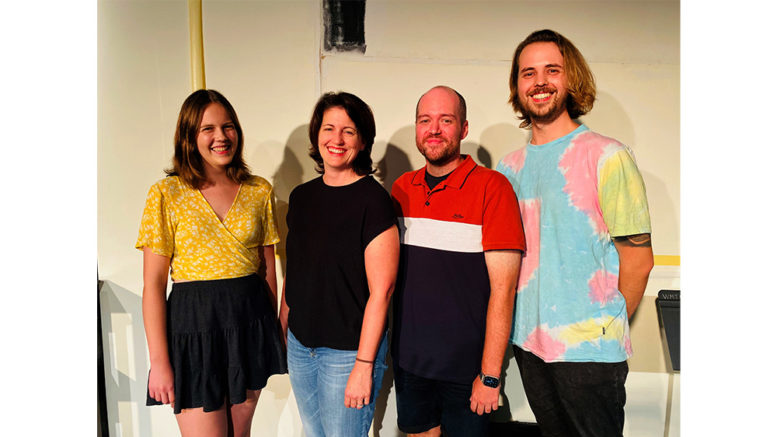 The cast of Songs for a New World, (From Left) Sophie Booth, Sancia West, PJ Willis and Isaac Ledingham

The Wyong Musical Theatre Company is back with its first musical since before the pandemic, with Songs for a New World having premiered on April 9.

The musical, originally produced by three-time Tony Award recipient, Jason Robert Brown, follows the stories of four characters that all have to make a choice to take a stand or turn around and go back.

“It’s a bunch of vignettes around pivotal moments in people’s lives, we all play multiple people, and it is challenging, but it’s also very fun,” said Isaac Ledingham.

He plays many different characters, like an advocate for refugees from the 15th century to a man in a bar trying to one-up another man on who’s life is harder, to a basketball prodigy trying to get out of the ghetto, a prisoner who has been wrongfully imprisoned and even a soldier who has died in battle singing to god and the people carrying him home.

Ledingham who lives in Wyong, works as a teacher and is not new to the theatre scene on the Coast, as he played Enjolras in Gosford Musical Society’s 2019 production of Les Miserables, and Khashoggi in their 2018 production of We Will Rock You.

“I think the basketball player is the most fun to play, also the solider is good to play as well as it allows me to shed a tear or two,” he said.

Ledingham, along with three other actors, practised twice a week for three hours over a five week period.

“Rehearsals are usually four to five months long, but for this one, was five weeks, it has been a slog for all of us.

“Jason Robert Brown loves to write really challenging harmonies, and we’ve really been drilling into it to practice,” Ledingham said.

Wamberal based Director, Daniel Craig, is at the helm of the production.

The show is running from Friday to Sunday until April 24 at the Wyong Grove Theatre.

“Songs for a New World is the perfect musical to get audiences back into the theatre.

“The musical is Jason Robert Brown’s first Broadway musical and is more of a song cycle that required four strong vocalists who had just five weeks to learn a complete score,” Craig said.

“This show will leave you pondering those choices you’ve made in life; whether it was to stay with a partner, take a chance on love, or explore new beginnings,” he said.

An afternoon of classical music