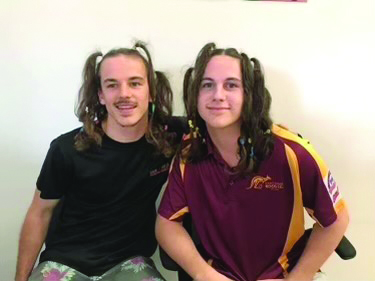 Declan and Riley Squire before shaving

In support of their father, who is battling lymphoma, three Lisarow siblings have shaved their heads for the World’s Greatest Shave to raise money for other families going through a similar experience.

“Someone mentioned the World’s Greatest Shave to me and that they were doing it,” Declan said.

“I decided that I would as well because I would not want anyone to go through what we have.”

The siblings’ father has been fighting a cancer that attacks the immune system for the past few years.

Declan said his father had undergone treatment, but with little effect, causing him physical, mental, and emotional pain over this period.

“We all stay positive and do everything we can for him in this time, but we have come to see that there is something we can do for others suffering similar circumstances,” he said.

“Me and my brother Riley have had long hair for years, and it is a very important part of us.

“My brother shaved all of his hair off, and my sister, who has hair longer than ours, also cut hers really short.

“There are many people who unwillingly give up their hair, and much worse, because of cancer every day.

“If shaving your head will make a difference in improving a person’s life, we will gladly do it.”