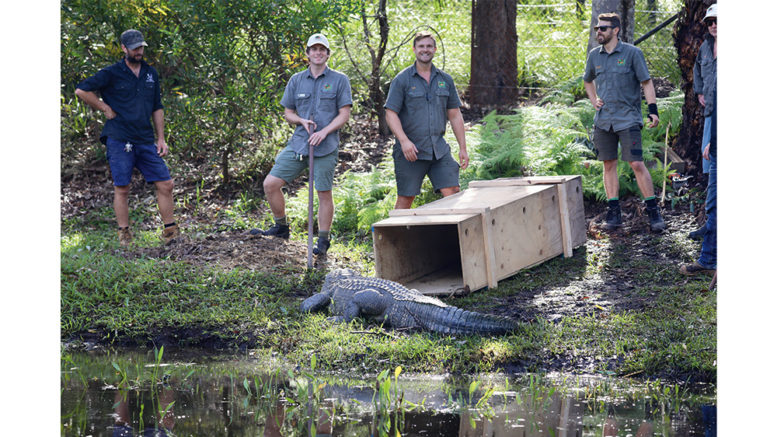 The Australian Reptile Park said hello to 10 huge, adult male alligators, when they arrived from Australia Zoo on March 30.

It was all hands on deck as keepers took on the physical task of introducing the alligators into their new home.

Zookeepers had to open each box carefully, releasing the alligators into the lagoon, which is already home to 45 other adult alligators.

“The ground is still wet and slippery from recent rainy weather, which added an extra element of danger,” Faulkner said.

“We all were kept on edge all morning but are happy to report all of the gators are safe in their new home.

“We didn’t know what sort of alligator was going to come out of each box as we opened them.

“Was this one going to be nice or was it going to come charging out with us being the first thing it sees?

“We were kept on our toes, that’s for sure.”

Head of Reptiles, Daniel Rumsey, said the keepers would keep a close eye on the new arrivals, ensuring they settle in nicely.

“One slight step out of place can cost you, so we are very careful to follow a well-thought-out plan and ensure the safety of all staff in such a mammoth task,” Rumsey said.

“We’re so glad to see it was a success, and all of the gators have begun to settle in and are swimming around happily.”

Most of the new alligators have been named after famous rappers, with Notorious B.I.G, Flavor Flav and Tupac being just a few of the new arrivals.

Is Hugo punching above his weight?

Kariong Parklands needs to be part of a bigger town plan