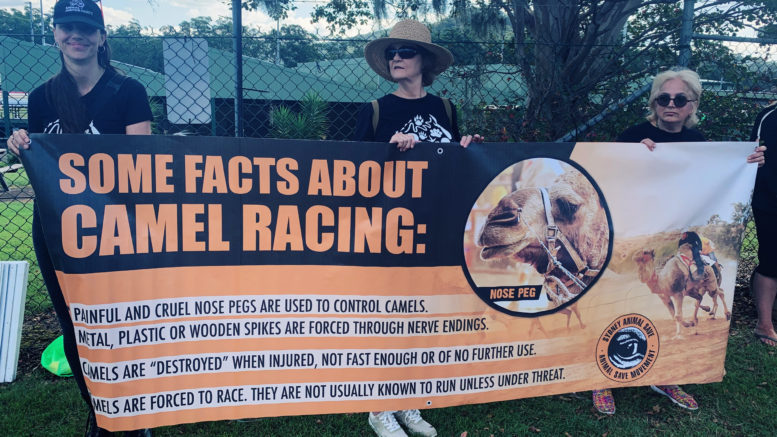 Activists from the Animal Justice Party were outside Gosford Showground on April 2 to protest against the Camel Races, calling them a “blatant display of animal cruelty”.

He said they aimed to raise awareness of the cruelty and exploitation of the animals forced to race by Camel Racing Downunder.

“Camel racing is cruel, inhumane and has no place in Gosford or NSW,” Brollo said.

“Watching innocent animals being whipped and forced to run is a shocking, public display of animal abuse.”

Brollo said attendance at the races was noticeably lower than they had seen at previous camel racing events.

“Typical of these types of events, we see that patrons have generally already purchased tickets,” he said.

“However, by outreaching and raising community awareness of the inherent cruelty in this industry, I am confident that many community members will not be returning to support this event and others that profit from animal exploitation.

“This is a clear trend, and by and large, the broader community do not support animal abuse in the guise of so-called entertainment.”

According to the Animal Justice Party, camels are born into the racing industry and often taken from their mothers early to face a lifetime of abuse on and off the racetrack.

“Under the current code of practice, camels can be immobilised – either by tying by the camel’s legs to one another, or tying one front leg in a bent position – for up to 12 hours as part of their ‘training’,” Brollo said.

“This peg is then attached to a strong rope used to control the camel’s movement and can cause substantial distress and injury in the process.

“Races themselves expose these already traumatised animals to loud noise, intense light, high vibration and loud baying crowds screaming and waving at them as they are viciously whipped by jockeys.

“It is disgusting that businesses are still resorting to putting on gratuitously cruel shows like camel racing to make a quick buck.

“It shows just how out of touch they are with community expectations on animal protection.”

Organisers of Camel Races Downunder, AMA Event Management, were contacted for comment, but no reply was received.