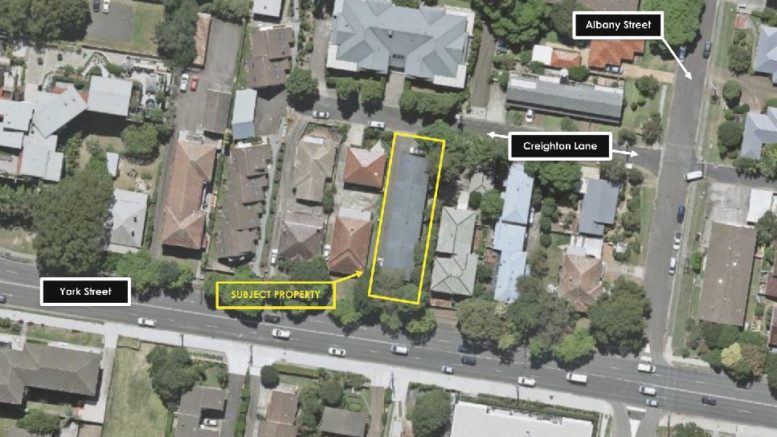 A DA for a 22-room boarding house at Point Frederick has attracted several objections.

A Statement of Environmental Effects (SEE) lodged with the DA says the $2.2M development would comprise a four and five storey affordable housing development comprising 22 boarding rooms and a manager’s residence.

It would also contain a communal room and communal open space area.

There would be a partly excavated basement and ground level undercroft carpark comprising 12 spaces for cars and five spaces for motorbikes.

As part of the proposed development, consent is also being sought for civil works including excavation, cut and fill construction of retaining walls and comprehensive landscaping of the site.

“The 22 rooms proposed are aimed at addressing the increasing demand for affordable rental housing in close proximity to the Gosford CBD,” the SEE says.

“In this regard, the units will appeal to and are likely to accommodate trainee doctors and students attending the new Central Coast Clinical School at Gosford Hospital, as well as university and TAFE students, health professionals and educators.”

The SEE says the building is contemporary in its design and presents “an appropriate height, bulk, scale and density, consistent with the emerging and desired character of the surrounding R1 zone and a number of recently constructed (and approved) higher density developments in the locality”.

“The site will also be comprehensively landscaped which, in conjunction with the retention of the majority of trees on the property, will enhance the existing character of the surrounding residential precinct and provide a quality environment and significant amenity for future residents,” it says.

According to the SEE, the new building is to be constructed essentially within the same footprint as the existing building it is replacing.

But objectors say the proposal is out of keeping with the area.

“At the moment Gosford is transitioning from a run-down derelict town to becoming a modern up-and-coming city,” one submission says.

“This is evidenced by the number of new up-market commercial and residential buildings that have been developed in recent years and (are) currently in development.

“A boarding house of this nature will be a set-back for Gosford.

“The establishment of low-cost housing of this nature was one of the main reasons for the town’s steady decline over the past three decades.”

Another submission said the State Government has just invested enormous amounts of money into the Gosford foreshore with the recent completion of the Leagues Club Park.

The new park, along with other developments taking place in the city centre, will draw many people into the area and develop the local economy, it says.

The proposal, it says, would “disrupt the current flourishing social progression Gosford is experiencing”.

Objectors need to stick to the facts