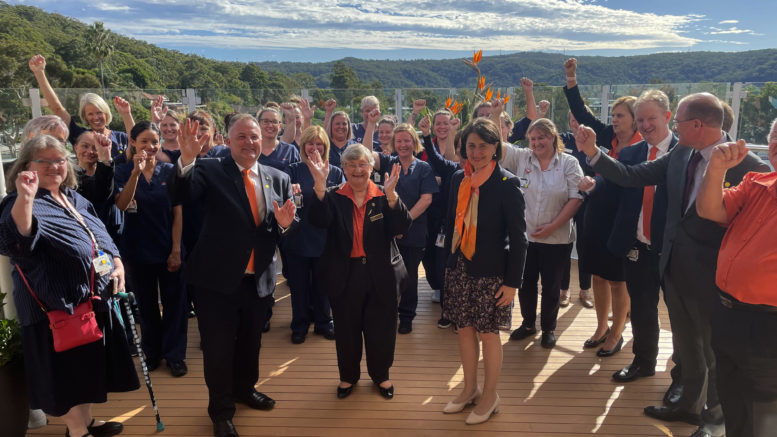 It has been a long push by all, but the Central Coast finally has its first dedicated in-patient palliative care unit.

The 10-bed unit was officially opened by members from Elsie’s Retreat, NSW Premier, Gladys Berejiklian, and Parliamentary Secretary for the Central Coast, Adam Crouch, at Gosford Hospital on April 14.

Over 12 years ago, members from the Lions Club of Wyoming/East Gosford Centennial joined forces to create the Elsie’s Retreat project which aimed to make good on a promise Oana McBride made to close friend and neighbour Elsie, who passed away from breast cancer while in a nursing home.

McBride made an emotional speech at the opening, stating how proud she was to see Elsie’s dream come true.

“I didn’t actually believe that this would be happening, it is just such a dream, and it has been so many years,” McBride said.

“I kept saying this isn’t real, but it is, and Elsie is getting something she dreamed of.

“Without my Lions family, it would not have happened, and also without this community (and) the wonderful members of Parliament over all these years pushing us through.

“Thank you for everyone on the Central Coast; you signed petitions, and you turned up for us.”

The new Palliative Care Unit can expand to 14 beds and includes sofa beds in patient rooms for family members/carers to use; two large family rooms; a lounge area with kitchenette facilities and comfortable lounges; a children’s area with toys; and an outdoor deck area with an automatic all-weather cover.

“Out of everything bad comes something good, and this is really proving it.

“She wanted something very grand; she wanted a huge place with cottages … and maybe one day that will happen.

“But this is the best scenario for us, we are at the hospital, near everything, we are central … and it is a safe place.”

Premier Gladys Berejiklian said people requiring a high level of care that could not be met at home would benefit from a caring team and homely comforts in the new unit.

“We know the majority of people prefer to be cared for at home but this new unit, staffed with a 20-strong team, will provide the support they need in a homely environment with rooms for family and carers to stay in,” Berejiklian said.

“The unit is located within the Gosford Hospital campus so patients have access to specialist medical, nursing and allied health services.”

Parliamentary Secretary for the Central Coast and Member for Terrigal, Adam Crouch, said the unit’s establishment was a credit to the Elsie’s Retreat group.

“The dream of a Palliative Care Unit has become a reality thanks to the years of campaigning and fundraising by the ‘orange army’ of Elsie’s Retreat volunteers as well as support from local businesses, the Local Health District and the NSW Government,” Crouch said.

The NSW Government will put $3M towards recurrent funding for 20 additional full-time equivalent staff to work in the unit as part of the growing palliative care workforce in NSW.

The unit is located in the hospital’s previous maternity ward which has undergone a $400,000 transformation.