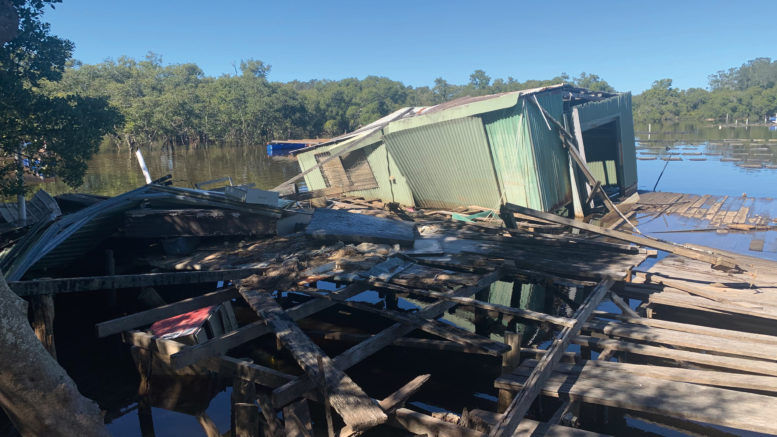 Last month’s flooding across the Coast has not only impacted businesses on land, but those at sea too, something Whittens Oysters on the Brisbane Water, knows all too well.

The family business has been out of work for over a month following the NSW Department of Health’s ruling to close all waterways due to low water quality.

Owner Tyron Whitten said this is the longest they have ever been closed.

“We have had closures before, but we have never been closed this long,” Whitten said.

“We have always been able to manage and have sellable oysters.

“It’s been over a month without any income, particularly for the 30 staff who have not had any work.”

Whitten is now awaiting results on whether the water quality is safe enough for oysters to be grown.

“When you have a lot of water, it brings with it a lot of debris and contaminant,” he said.

“After a certain amount of rain, there is a certain trigger point where they close the waterways, and you can’t reopen until they’ve done the testing.

“There is lots of testing happening in the waterways across New South Wales.

“We usually don’t test until we are very confident they will pass; otherwise, we are just wasting money.”

He said it takes two years for an oyster to develop from a juvenile oyster (a spat) to a sellable product.

“We had to buy a whole bunch of oysters over Easter to keep our customers happy and our people employed,” Whittens said.

Whitten said Brisbane Water was one of the luckier waterways as it does not consist of a large estuary.

“We also have oyster farms in Lake Macquarie and Nambucca, and the floodwaters have belted them,” he said.

Despite the hardship, Whitten remains positive, saying this is just one of many barriers’ farmers have to go through.

“It is just one thing on top of the other, but that’s farming; you can’t cry about the weather,” he said.

“We are certainly not the hardest hit out there because there are plenty who have been hit a lot harder.

“Any farmer who gets upset by the weather too often, you in the wrong game because that is what we do.”