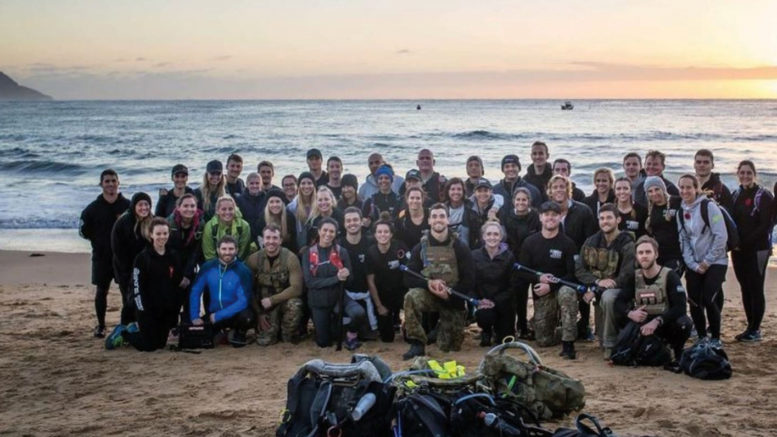 People can show their support for veterans and raise money for the charity Mates4Mates, by taking part in the Trek4Vets walk during the early hours of Sunday, April 25.

The walk begins at Putty Beach at 12.40am and takes the 19km coastal route to Terrigal Haven, arriving at approximately 5am just in time for the Anzac Day dawn service.

Treks4Vets was formed in 2015 by former Australia Defence Force (ADF) members Andrew Pap and Dean Luland as a way for people to pay their respects to all who have served by sacrificing some sleep before attending the dawn service.

Andrew Pap said the driving force behind Trek4Vets came after he lost a close friend from the ADF to suicide.

“It really hit me hard because we were close mates, and he always confided in me,” Pap said.

“I was at a dawn service in 2015, and it was absolutely bucketing down with rain.

“This young girl in front of me said to her friend, ‘you know the ANZAC’s would have had to fight through the rain’.

“That is when I thought, why can’t we make this day more significant and give people a small taste of what our servicemen and women would have gone through every single day.”

Registration fees for the event go towards Mates4Mates, a charity which supports veterans who have been impacted by service-related injuries, and their families.

“For me, it was the camaraderie and the relationships I built in the military and seeing the impact serving your country can have on people,” Pap said.

“I wanted to bridge the gap between the military and the civilian community.

“I wanted to make an event where our veterans felt supported by the community and our civilians can gain a greater understanding and have more of appreciation of what is going on.

“A lot of charities allow you to give donations which goes to helping veterans, but maybe you don’t get the chance to meet some of those veterans and see where the money goes.”

There are currently three Trek4Vets happening around Australia; at Terrigal, Canberra, and Noosa.

Troy and Kasey Paul joined as partners with Trek4Vets in 2018 and will be running the Terrigal event.

“We had around 230 people who walked from Putty Beach to Terrigal in time for the dawn service in 2019, raising approximately $8000,” Troy Paul said.

Pap is encouraging veterans all over Australia to get involved and start their Trek4Vets in their local area.

“It can give them something to organise, something to look forward to, and allow them to use their unique skill set, that may not be very transferable in the civilian world, at an event which is very important to them,” he said.

“It also gives them a chance to catch up with other vets.”

Participants will meet at Terrigal Haven at 11.30pm for registration the night before (Saturday, April 24) and then travel to Bouddi National Park for a “mission briefing” at the start line.

People are required to bring their own head torch/flashlight, enclosed footwear that’s suitable for hiking the distance, a weatherproof jacket, snacks, a minimum 2L of water, and a mobile device.

A St John Ambulance and a support vehicle will be on standby in case of an emergency.

Tickets are $65 and must be purchased before the event through www.trek4vets.com.au.