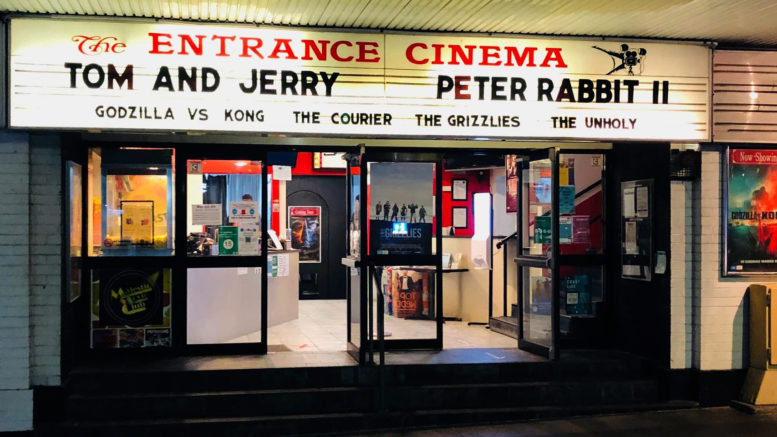 Tom and Jerry was the final movie screened at The Entrance Cinema on Sunday night, April 18, before the curtain fell on 87 years of memories across generations for local moviegoers.

The cinema operated for the past 14 years as part of the Majestic Cinemas group, closing its doors following a change in building ownership.

The cinema first opened as the Prince Edward Theatre on April 13, 1934, and it was an immediate success as the other cinema in The Entrance, the Wintergarden Theatre, had burnt out earlier that year.

The Prince Edward Theatre closed in 1977 but reopened in 1981 as a smaller theatre and was renamed The Entrance Cinema.

A second screen was added in 1988 and it was completely refurbished in 2007.

It was the first cinema on the Central Coast to be equipped with digital projection.

“Across the 14 years, we’ve experienced such a loyal and engaging cinema community who have treasured with us the almost 100-year-old picture theatre,” said a statement from Majestic Cinemas.

“It’s been an absolute pleasure being a part of the Central Coast community and we can’t thank you enough for your patronage over that time.

“From watching young cinema goers turn into adults, treasured staff grow up and move on to exciting careers, supporting local community groups wherever we could, the ride has been full of love, laughs and memories that will not be forgotten.”

The Entrance MP, David Mehan, said it was a great disappointment for the community and the township.

“The CEO of Majestic Cinemas tells me that the building has a new owner and that the new owner’s expectations of rent are completely unrealistic for our area.

“That’s the heart of the problems here, the building owners’ expectations of the rent that cannot  be afforded by the many, many good businesses that want to operate or set-up in this area.

“There’s no shortage of people in our area that have good ideas to set-up a small business in The Entrance but the expectations of high rents are just out of this world.

“On top of that, the last thing we need is Council closing the library across the road, it’s also a Council office, and they need to be supporting this area right now, not closing down another service in the area.

“I’m going to re-double my efforts to keep things open in The Entrance and make sure that Council gives this area the attention it deserves and I thank the community for its ongoing support,” Mehan said.