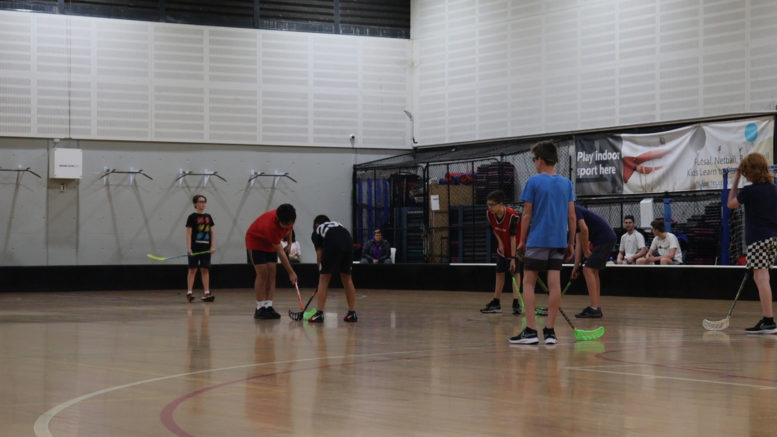 What started as a small, internal school holiday competition for the Peninsula Thunder Floorball Club soon grew into a three age division, 80 player tournament played throughout Tuesday, April 13, with a local talent taking away the win.

Held at Peninsula Leisure Centre, where Thunder their Elites, Mixed, Senior Youth and Youth league competitions, the inaugural Super 4’s Junior Competition involved players from Queensland, Newcastle, Kulnura, Sydney and the Central Coast, with new beginners to the sport as well as those who have been with Thunder since its formation in 2011.

The usual format of five verses five, plus goalkeepers, was scrapped for a more open style four on four game on a smaller court, with participants commenting on the fun, great competition, and wonderful team spirit on display.

One such competitor on this day was Thunder club member Dominic Hall, previous participant in the Junior Australian Floorball Open and member of the winning Super 4 team that was made up of members of the national team.

In Hall’s Semi Final, a tightly contested match finished in his team’s favour 1-0.

The Grand Final presented less of a challenge for the team, who posted five unanswered goals to win overall.

For Hall however, the sport is played for a love of the activity and the connections it makes possible.

“I really like the intensity of the sport,” said Hall.

“Whatever happens on the court happens, so that when you come off after the match you are still mates with all the people in the match.

“It’s a lot of fun to play in a high intensity game and then come off and still be friends.”

The Super 4 was organised by club founding members, Alan Clay and Julie Clay.

“(Originally) it was only going to be a small event,” said Alan.

“My wife, Julie, decided to open it up and put it on our club website to anyone who wanted to play.

“We had half a dozen players coming up from the Northern Beaches in Sydney, about 14 players coming down from Newcastle and more from around the state.”

Alan, who is also an ex-Australian Floorball National player a part of the 2002 and 2004 World Championships teams, also shared some notes on the growth of the sport in Australia and the future direction of his club.

“When we first started up here in 2011, it was with only 20 players coming together on a Tuesday night, and once we secured the ring here at Peninsula Leisure Centre, we grew quickly and started to play floorball properly.

“In a short 12 month space of time we started our juniors program and it really took off.

“In around two years we had about 100 players, level with Newcastle, and four years later we were the biggest club in Australia with about 200 players.

“Now, we are looking to grow competing clubs across Australia, with a particular focus on junior participation.

“Next year in the July School Holidays, our club will be hosting a Junior Australian Floorball Open.

“The last time we held one was in 2017 and we had 300 players involved, the biggest Open ever held in Australia.

“Clubs came from New Zealand, Western Australia, Queensland, Victoria as well as quite a few clubs and school teams from New South Wales.”

In the meantime, there is plenty of floorball to be had on the Peninsula, with the internal Tuesday evening league having six more rounds this season with a finals series to end it, scheduled to take place in June.

Around the grounds, Sport, Sport Show