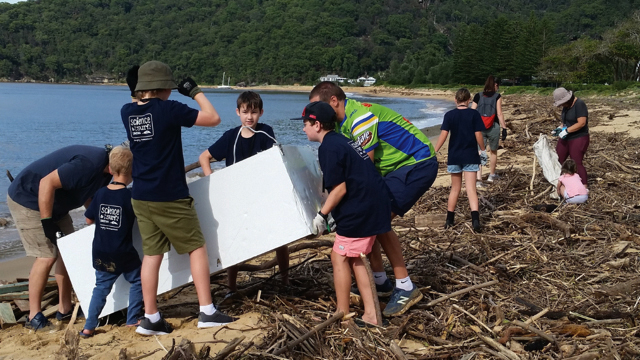 Homeschooled students around the Peninsula teamed up with Take 3 for the Sea on March 25 to remove over 1.96 tonnes of waste following the recent floods.

Over 100 students from Simply Homeschool gathered around Patonga Beach and Umina Beach on Thursday morning to help clean up the areas and learn about the importance of keeping waterways clean.

Take 3 were joined by Clean4Shore for the second time in March, with founder Graham Johnston filling an entire barge with objects swept out to sea.

Students also found a motorcycle tank, a fridge, tyres, and a large industrial light head among the cleanup

At just eight years old, Austin, was one of the youngest students in attendance.

“I thought there was a bottle cap stuck in the sand, but it was actually a whole bottle,” Austin said.

Take 3 CEO, Sarah Beard, said their work was more important than ever following the recent floods.

“Empowering young people to be part of the solution to plastic pollution is so important,” Beard said.

“These children want to look after their environment and seeing their disgust at the amount of litter we found but also hearing them share stories about saving wildlife and the ocean is so rewarding.

116.5kgs of litter removed from waterways at The Entrance North

Be the first to comment on "Homeshoolers join coastal clean-up"