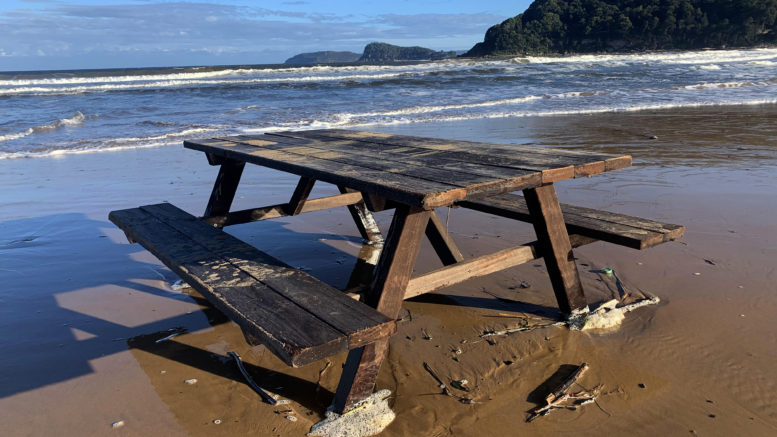 Fridges, pontoons, furniture, pumpkins and even a cow were some of the strange things which washed up on Central Coast beaches following huge storms which savaged the region from March 18-23 as Central Coast Council conducted a major clean-up effort to restore roads, waterways and foreshores.

But for one item which washed up on Umina Beach there was a happy ending.

Resident Tina Vella was walking along the beach at around 5pm on March 31 when she noticed the hardwood table sitting at the water’s edge, alongside much debris which had been carried from the Hawkesbury area.

Vella took a photo and posted it on Facebook with the quirky tagline “used table, going cheap”.

“A friend of mine, Maree Langburn, saw my post and then shared it to the Facebook page Hawkesbury Floods Lost and Found,” Vella said.

“Maree messaged me to say the owners of the table had been thrilled to see the post and had collected the table a day or so later.

“It came all the way from Lower Portland and was made of hardwood from the old wharf at Port Kembla.”

Vella said the owner of the table had posted a thank you for the happy ending.

“I have it back at Lower Portland where it was washed away off our caravan deck,” he wrote.

“My wife had contacted the Umina Surf Club whilst I was on my way up, and they kept an eye on it until I got there.

“Harry the lifeguard took me down the beach in their 4×4 and helped me get it out to my trailer in the car park.

“The table was made from recycled hard wood that was from the port Kembla shipping wharf.

“The old timber was re-milled down to new and made into the table 10 years ago and has sat on the caravan deck since.

“(I) cannot believe it survived and where it ended up.

“Thanks again to you and your friend for all that you do for the community.”

Vella said she was thrilled at the result.

“It’s a beautiful story about communities working together,” she said.

“We all know that natural materials – especially seagrass and seaweed – wash up on our foreshores after these events,” Hart said.

“We received many reports from community groups and members who had noticed debris washing up on our beaches; in some cases, they have worked together to safely move these items up away from the water, ready for us to collect.

“In other cases, the items were too large or dangerous to move and the community alerted us to the location of these objects.

“This made it much easier for us to know where the hot spots are, and I want to thank them for taking the time to alert us to these issues.”

As the clean-up reaches its final stages, residents are advised they can place seagrass and vegetation debris in a safe location next to access roads or pathways within foreshore reserves, or on the kerbside outside of their property for collection by Council.

Residents can also book a bulk collection through Council’s contractor Cleanaway to remove flood affected waste or take it to their local waste management facility for a reduced fee.

What should and shouldn’t be off the table