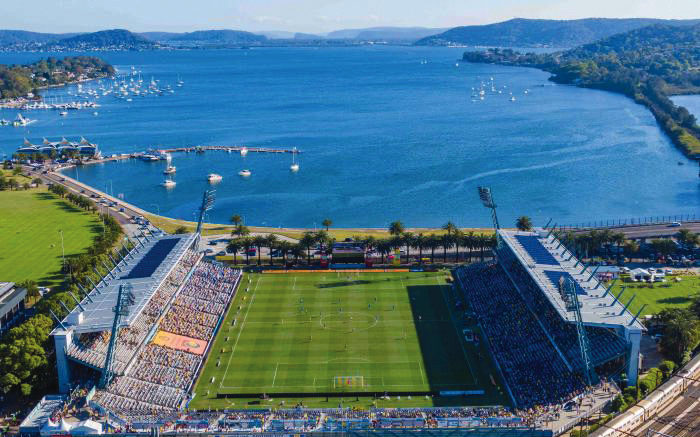 The public now has a three-week window to have its say on a Central Coast Council proposal to reclassify and rezone land at the Central Coast Stadium on the waterfront at Gosford.

The stadium is currently zoned RE1 with a land classification of Community Sportsground.

This is a “major hindrance” towards the stadium site’s development opportunities, says a Council report that went to the meeting of April 27.

RE1 zone objectives enable land to be used for public open space or recreational purposes.

Council wants to rezone the land and reclassify it as operational, including the Gosford bowling club which is part of the parcel of land.

Zones such as B3, B4, or B6 or a mix of these zones are being suggested.

The B3 objectives are “to provide a wide range of retail, business, office, entertainment, community and other suitable land uses that serve the needs of the local and wider community”.

The B4 objectives are meant to integrate suitable business, office, residential, retail and other development in accessible locations so as to maximise public transport patronage and encourage walking and cycling and to encourage a diverse and compatible range of activities, including commercial and retail development, cultural and entertainment facilities, tourism, leisure and recreation facilities, social, education and health services and higher density residential development.

The zone also hopes to enliven the Gosford waterfront by allowing a wide range of commercial, retail and residential activities immediately adjacent to it and increase opportunities for more interaction between public and private domains.

The B5 objectives include enabling a mix of business and warehouse uses, and specialised retail premises that require a large floor area, in locations that are close to, and that support the viability of centres and also to recognise small isolated business and commercial areas located throughout Gosford.

Council says rezoning and reclassification of the stadium site will allow complementary uses there and allow greater flexibility in any adopted Masterplan design.

Only a month earlier, at the March 23 meeting, Council had agreed to adopt a Stadium Implementation Plan which meant it was to begin looking for a suitable partner for the management rights for the stadium.

Now this April proposal to rezone the land and reclassify it includes three main areas.

The April report says the Dane Dr area could be “activated” for retail outs.

It says the Western grassed area is under-utilised and presents as a site to be developed to a higher and better use.

It was mentioned in a draft parking report last year as a possible site for more commuter carparking but that isn’t canvassed in this report.

The Northern Area- currently leased to the Gosford Bowling Club – is described as a key site which could be developed to a higher and better use.

A Masterplan for the stadium site is scheduled to be completed by December of this year.

Council said that key to any adopted Masterplan was the appropriate zonings and land classification which would enable greater precinct activation and connectivity to the city centre and waterfront.

Council will need to prepare a planning proposal to amend the Local Environment Plan and change the zoning and reclassify the land to allow complementary uses at the site.

1 Comment on "Have your say on rezoning of stadium site"