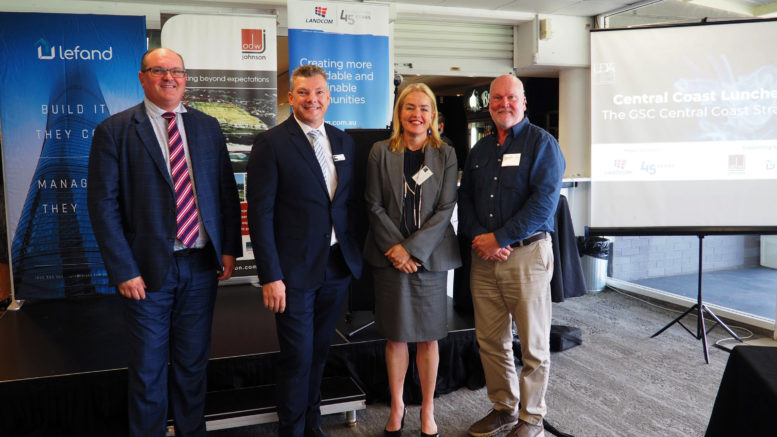 Unlocking employment land in Wyong and Warnervale is the highest priority set by the Greater Sydney Commission (GSC) in its Central Coast Strategy to drive economic and employment growth in the region.

Another six priorities were outlined by GSC Economic Commissioner, Jackie Taranto, when she addressed the Central Coast Chapter of the Urban Development Institute of Australia (UDIA) meeting on March 31 at Wyong Race Club.

In July 2020, Premier Gladys Berejiklian tasked the GSC to establish a Central Coast Strategy to identify priorities to capitalise on the region’s significant potential.

Taranto said the GSC found that the region was hindered by long and complex planning processes, poor co-ordination and economic development, lack of incentives to attract and retain investment, lack of transport and utility service infrastructure, and limited supply of serviced unconstrained employment land.

The GSC’s seven key priorities could help turn that around and Taranto said it was important to know that they were just the start with further initiatives to come.

The priorities are: to unlock employment land in Wyong and Warnervale; accelerate the Mount Penang employment precinct; establish a university campus in Gosford CBD as part of a wider education and employment area; build on the Gosford health and wellbeing precinct; improve connections within the Central Coast and with Sydney and Newcastle; deliver a high speed internet network; and, improve planning processes to accelerate development approvals.

“There’s already a huge food production industry on the Coast, with headquarters for Mars, Sanitarium, McCain and one of the largest cold storage facilities for Woolworths, that was a large growth industry through Covid,” she said.

“Wyong and Warnervale’s largest areas of industrial zoned land mean that there is huge capacity for more business and investment, the potential to attract international organisations and a big incentive is that the Central Coast offers 30 percent lower establishment costs per hectare than other surrounding areas and in Sydney.”

The same applied to unlocking more land in the Mount Penang employment precinct, to attract office and warehouse industries, recreation, education and business.

The GSC’s Central Coast Strategy has big plans for Gosford CBD, with a university campus as part of a wider education and employment area, building on a health care and wellbeing precinct, and high-speed internet to attract knowledge based business and increase demand for office space.

Two-thirds of undergraduate university students on the Coast study outside the region and a local campus can help build and retain local bright minds with flow-on effects for local businesses, innovation and entrepreneurship,” Taranto said.

Taranto said the Central Coast would be home to 88,000 new residents by 2040 and to meet that future demand, opportunities were needed for health care and social assistance workers, and much needed health services.

“We see significant investment in this area as vital.”

Also, Taranto said that as more businesses were looking to relocate to regional areas, more investment was needed in the transport corridor between the Central Coast to Sydney and to Newcastle.

“This is a big one; and prior to COVID-19, 44,000 people commuted back and forth with two-thirds of them by car on the road corridor between Sydney and the Central Coast, which is the third most congested in Australia.”

She said a long-term rail strategy was needed and suggested even 30 minutes of light speed rail connecting Gosford and the northern suburbs of Sydney would be of economic benefit to the Coast.

Taranto also noted the “huge opportunity” for the Central Coast when the new airport opened in western Sydney in 2026.

“We will have a 24/7 airport on our doorstep, opening up an economic corridor straight up here,” she said.

To attract investment and business to the Coast, Taranto said improvements to assessment processes early in a project’s life cycle would reduce risk, streamline development and attract regional investment.

“Central Coast Council has an average waiting period of 43 days for a development application and even if broader reforms reduced the wait by 20 percent, this could avoid between $300,000 to $1.4M in interest rate costs alone, and that could also facilitate development that could not otherwise be financially viable,” she said.

The Central Coast Strategy has been submitted to the Premier and Cabinet and it is expected that in a month or so the Premier will appoint an Implementation Committee, and by the end of 2021 the Coast should see movement on “quick wins” in some of the priorities to set the Strategy on its path.