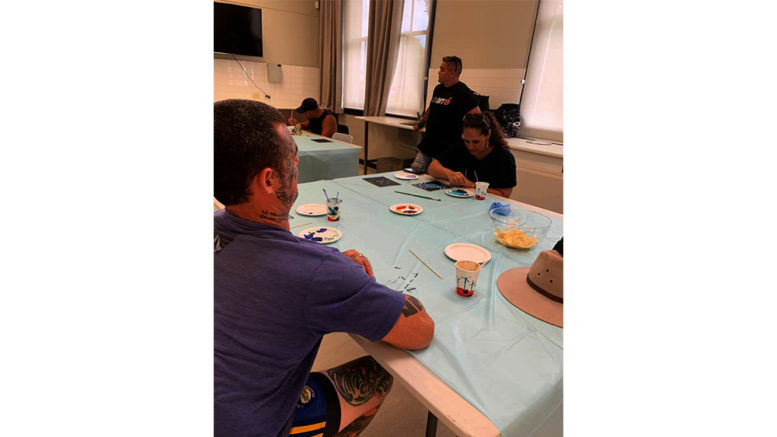 An art session at The Glen

Men at The Glen rehabilitation centre at Chittaway Point are picking up their paintbrushes and putting them to canvas for the upcoming Saltwater Freshwater Art Exhibition.

They are just some of the artists that will be on exhibition at The Entrance Gallery from May 26 to June 13, which also features the works of Garry Purchase and Kylie Cassidy, along with other Aboriginal guest artists.

“We have a wide range of art, created by some very talented artists,” Kylie Cassidy said.

“The talent there is amazing,” she said.

Ten of the current and former residents at The Glen will participate in the Saltwater Freshwater Art Exhibition which was created by Cassidy and Purchase.

“We saw that there was a lack of Aboriginal art exhibitions here on the Coast, so we started Saltwater Freshwater, and we really just want to promote indigenous art,” Cassidy said.

The name Saltwater Freshwater came about from the hometown areas of the two artists as Cassidy comes from the NSW central west town of Orange and Purchase grew up in La Perouse.

The exhibition opening event will feature a cultural immersion experience.

At this event, there will be talks from the artists featured in the exhibition about their artwork, as well as a tour through the gallery.

There will also be some workshops to teach people about ochre and its significance in Indigenous art, as well as painting workshops and clap stick demonstrations.

“Opening night will give everyone a taste of culture,” Cassidy said.

Cassidy has an extensive history as an artist, starting when she was just 13, and along the way achieving several awards.

When she was 17, Cassidy was awarded first prize in the Youth Award and at 19 she received the Tony Donovan Encouragement Award.

Cassidy also has painted murals and workshops in schools across the Central Coast and even designed the 2020 Sydney Roosters Indigenous Jersey.