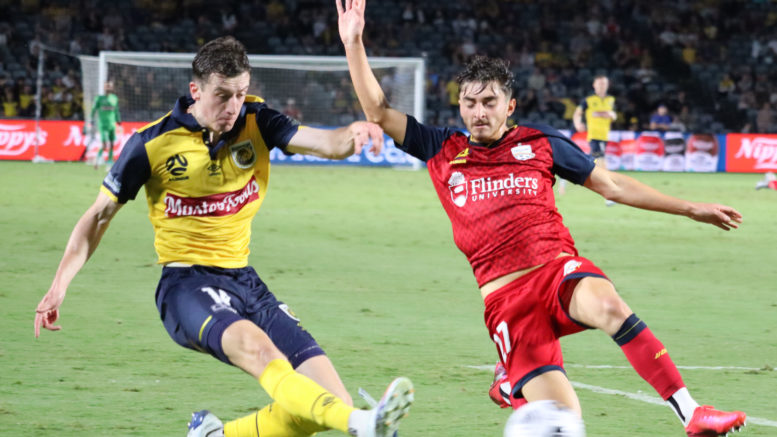 A drama-filled night at Central Coast Stadium has ended with the Mariners maintaining their lead at the top of the A-League ladder following a nail biting 2-1 win over Adelaide United.

The game was eventful from start to finish – penalties, handballs, two potential concussions, tension between the benches – all backed by chanting from over 5000 Mariners fans.

The game was always going to be one marred with tension with the memory of their previous encounter’s penalty fiasco on February 19. As well as this, with only one point behind the Mariners and a game in hand, Adelaide were presented the chance to go top of the table.

Yet with turns to and fro throughout the 90 minutes, the game did not go to any recognisable formula, beyond impressing the Mariners’ usual home ground momentum. In the end, and after two missed penalties and a goal deemed offside saw the Mariners bounce back with character to clinch the three points.

For the first 30 minutes, the Mariners looked dangerous, inching further up the pitch with shot after shot towards Adelaide keeper, Joe Gauci in goal. A handball claim from the Mariners in the 13th minute saw VAR involved after the referee initially waved the calls off. Forward man, Matt Simon, stepped up to the spot but failed to convert, but Adelaide keeper, Joe Gauci, clipped the ball with a trailing leg to launch it high into the sky.

Just minutes later in the 22nd, a cross came in from Stefan Nigro to Simon, who met it with his head and found the net at the back post, only for it to be overruled due to an offside from an earlier passage of play.

Adelaide seemed to re-find their footing as the first half drew to a close but the Mariners scrambled well defensively to keep the visitors at bay. The second half brought a new wave of drama with Adelaide securing the opener from Kusini Yengi, who leapt onto a cross and smacked the ball past Mariners keeper, Mark Birighitti in the 48th minute.

As play flicked back and forth between the two sides, a chance for the Mariners saw the referee give a penalty for another handball offence from the visitors. Gauci then saved his second penalty of the night, denying captain, Oliver Bozanic the equaliser in the 58th minute.

Match-winning moves from Mariners Coach, Alen Stajic, saw a double substitution in the 64th minute as Simon and Marcos Ureña were replaced by Alou Kuol and Josh Nisbet. It wasn’t long before the Mariners levelled the score as fantastic play on the counter found Bozanic, who edged in between the Adelaide defensive line before firing past Gauci in the 72nd minute.

Soon thereafter, the home side doubled their score with a super strike from Kuol, only four minutes later. An impressive pairing between the two subs saw Nisbet pressure Gauci into making an error, before keeping the ball in and setting up Kuol to slot the ball home. After enduring several matches without a goal, Kuol now sits on seven A-League goals this season.

Despite their lead, the Mariners kept the pressure on Adelaide as they searched for a third, right up until the final whistle. Adelaide’s loss sees them break their six-game winning streak and drop four points clear of first on the ladder.

With a loss also coming for third place, Melbourne City, the Mariners can take another quick breath on the top of the table ahead of their next match against Western Sydney Wanderers. This game will be played at Bankwest Stadium on April 6, kick off 7:05pm.