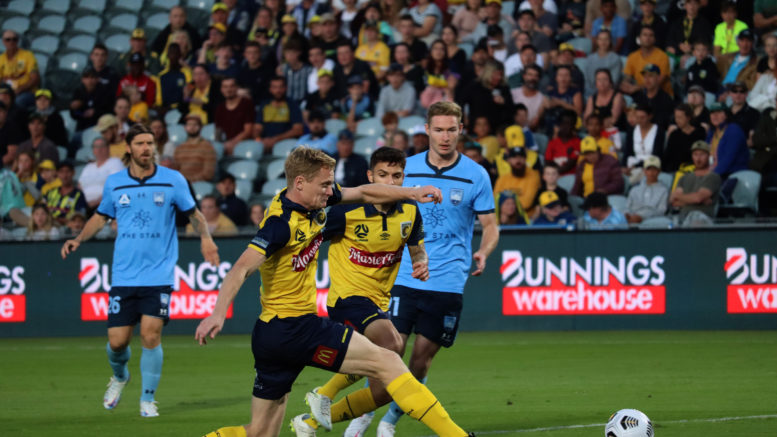 Sydney FC came back from a two goal deficit against the Mariners at Central Coast Stadium on Saturday, April 24, in another entertaining fixture on home soil.

A lot was on the line for both sides for this match with the Mariners seeking to do the double over their old rivals after their away game win in January, and to prevent their rivals from overtaking them on the table.

The opening minutes of the game were unsurprisingly tight with neither team wanting to make any early slips, and yet both losing their footing a couple of times to the deceptively wet pitch.

It took only 6 minutes for the Mariners to find the opening goal from Marcos Ureña’s space finding run, reversing the fortunes from their early concession in last round’s match against Western United.

After Jack Clisby’s tackle on Alex Baumjohann yielded the ball for Oliver Bozanic, the Mariners’ captain found the quickly reacting Ureña racing in behind the opposition’s high defensive line.

Positioned in a wide angle in front of goal, the Costa Rican gem still had work to do in aligning himself better in front of Sydney goalkeeper, Andrew Redmayne, requiring him to cut inside of the fast retreating Alex Wilkinson in defence.

From here, it was one on one with Redmayne, and an early feint shot sold the keeper into dropping to his knees and a simple pass sufficed to bring the score to 1 – 0.

With the lead established, the Sydney side found the motivation to push back hard against their hosts, and for the majority of the remaining first half, the team dominated the possession and pass count.

It culminated in a disallowed goal for Sydney due to an offside called by the assistant referee.

Milos Ninkovic had the ball in the box, matched up against Mariners debutant, Dan Hall, in defence.

Hall was successful in disarming Ninkovic, but the ball came to Bobo, who found the space to shoot at goal and land the ball home.

The flag went up immediately to prevent his celebration and the visitors were forced to try again for their desired goal.

Soon thereafter, it was the Sydney defence that was next to break, due to flair play from the Mariners, finished off by Matt Simon, well against the flow of the game.

The 41st minute goal came from a one-two double dink play improvised between Simon and Joshua Nisbet to cut open the lane to the net.

Firstly, Simon chipped the ball over Anthony Caceres to find Nisbet, who, with his back to him, did the same to Joel King, finding Simon making the run in on goal.

A first time strike from the veteran striker drove the ball low across goal to find the bottom corner, putting the Mariners two goals in front.

With the hosts in a position to hold on to a cushioned lead into half time, Sydney pushed hard to find some respite before the break.

This came for the blue boys in injury time on the end of Luke Brattan’s cross.

The ball reached Ninkovic, who proved the finesse of his touch by guiding the ball into the top corner of the goal from a first time, outside boot volley that chipped the un-expecting Mariners’ keeper, Mark Birighitti.

With the Mariners ahead at the start of the second half in what was shaping up to be another nail biter, the extra effort would nonetheless have to come from the visitors.

It took 10 minutes for the visitors to find the net again in what appeared to be the equaliser, before a VAR check ruled out the goal due to an offside.

Sydney’s free kick found Wilkinson on the far side of the goal after seemingly coming off Simon in defence.

Wilkinson’s lobbed header brought the ball back across goal and was first reached by Bobô, who towered over Nisbet to head the ball home.

The extended VAR check found a number of Sydney players to have been offside from the initial kick and referee, Shaun Evans, deemed them to have been an obstruction for the Mariners’ defence, again denying Sydney and Bobô an equalising goal.

Both teams continued to push against each other as the game moved into the final third of play, with the chance to score coming to both sides.

Another great counter attacking opportunity came for Ureña from Bozanic’s lobbed through ball, but the striker could not repeat his earlier success.

In the 78th minute, he was subbed for Kuol to the sound of applause from adoring fans, proud to see the Mariners’ talent ready to play again despite his recent signing for VfB Stuttgart.

The final ten minutes shaped up for an even contest at the win after a terrible defensive mistake led to the Mariners conceding to Sydney the coveted equaliser that had alluded them so far.

Although Kye Rowles has posted the most clearances in the A-League this season, his disastrous pass fell straight into the possession of Trent Buhagiar, who led Kosta Barbarouses into the box and benefitted from the return pass that slid beyond Gianni Stensness and was put away with ease.

Now that the Mariners’ two goal lead had been overcome, the momentum was with Sydney and they kept a firm hold on possession.

A chance came for Daniel De Silva from Kuol’s through ball header, positioning him in space on a 45 degree angle against Redmayne, but his shaky shot streamed on the wrong side of the far post.

Despite struggling to survive beneath the late Sydney onslaught of shots on target, the Mariners managed to do so until the end, although they were unable to benefit from their own chances on goal as well.

The game ended 2 – 2 with the panting and smiling of the players suggesting their overall satisfaction in the well fought derby match.

A draw may be far from a win, but both teams played well and both sets of fans were treated to a great game of football.

For the Mariners, the without a loss streak at home ticks over from six to seven, the team now in sight of their 10 match record.

On Wednesday, April 28, the boys in yellow will have their chance to make it eight as they strive to defeat Brisbane Roar whom they have not yet faced this season.

With the table top four competition tightening up, and only standing unsteadily ahead of the next six teams, wins for the Mariners are crucial if they are to finish in an advantageous position for the finals series.