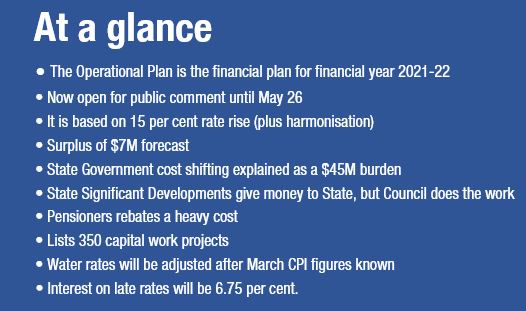 Central Coast Council has placed its draft Operational Plan 2021-2022 including proposed fees and charges on exhibition for community feedback.

The Operational Plan provides residents with an overview of essential services, programs and capital works projects for the year ahead and is exhibited annually for community input.

The fees and charges do not include a comparison with last year’s fees.

As part of Council’s plan towards financial recovery, the 2021/22 operational plan forecasts Council’s operating income as $666.8M from which Council will spend $659.8M on services and operational costs resulting in a modest surplus of $7.0M.

This forecast is based on the Independent Pricing and Regulatory Tribunal (IPART) allowing council to impose a 15 per cent rate rise – called a special rate variation.

It does not include capital grants and contributions, which Council says will be allocated towards repaying the restricted reserves debt.

Council proposes to spend $173.5M on capital works projects, with a focus on depreciation and maintaining Council’s existing infrastructure.

“Should IPART determine no Special Variation, then the numbers that Council is working towards would reduce and more budget cuts will need to be applied,” the Council said.

The plan explains that Council is currently not financially viable and the need for the rate variation has been demonstrated by the current situation in which Council finds itself.

“Even with actions including staff, expenses and capital expenditure reductions and raising $150M in external borrowings, Council’s long term financial viability is not achievable without a Special Rate Variation,” the plan states.

“This would allow the provision of services, the repayment of borrowings and the eventual repayment of the funds spent from restricted funds,” the plan outlines.

“Without the variation, Council would need to reduce its operating expenses further which would mean a further reduction of the workforce by a third.

“This would potentially result in significantly reduced services below acceptable levels.

It would impact the ability to deliver services and works.

“The staff levels would be below those at amalgamation, which themselves were artificially low as identified in the Administrator’s 30 day report.”

The report states that it will need to updated before implementation because water and sewer charges will be adjusted for CPI increases.

“Council has estimated the CPI multiplier as 1.5% as the CPI for the March quarter 2021 has not been released at the time of developing the draft 2021-22 Operational Plan budget,” Council said.

“Once the CPI is released Council will calculate the multiplier to apply to the 2021-2022 charges.

The plan outlines the cost to the Council from State and Federal government’s “cost shifting”.

The cost is shifted without providing corresponding funding or adequate revenue raising capacity.

Council said cost shifting continues to place a significant burden on Council’s financial situation, to the tune of about $45M per annum.

“Despite the recognition of cost shifting and its adverse impacts on NSW Local Government there has been no change in funding for these costs,” the Council said.

“Our region has a higher proportion of aged pensioners compared to other local government authorities,” Council said.

“As the number of eligible pensioners increases in our local government area Council must fund a larger amount of pensioner rebates.

“The estimated total amount of pension rebates for ordinary rates and domestic waste management charges in 2021-2022 is $6,373,000 of which 55% is funded by the NSW Government with the balance funded by Council.”

Of these reductions 55 per cent is reimbursed by the NSW Government.

The Minister for Local Government has determined that the maximum rate of interest payable on overdue rates and charges levied under the Local Government Act 1993 for the 2021-2022 rating year will be 6.75 per cent.

Council said that income related to development applications has fallen in recent years and a significant proportion of this is a result of changes to State Significant Development (SSD) provisions, including specific provisions of the Gosford City Centre.

“Under these circumstances applications are lodged (and fees paid) directly to the Department of Planning Industry & Environment,” the Council said.

“These SSD provisions are generally for larger applications and therefore the fees are significant on a per application basis.

“Council officers are still required to undertake assessment work for these applications, through formal referral processes, so whilst the fees are reduced, the level of work remains approximately the same.”

“Every year Council presents a plan of works to the community in line with what they have told us is important to them, which is the continued delivery of essential services, the environment, community facilities and open space and recreation,” Persson said.

“It is important to note that Council has actively taken steps towards financial stability, and while there is a calculated reduction in service levels this does not mean the delivery of services will stop.

“We are still looking at delivering over 70 essential projects that will better our region and community, and we can do this because we are aware of how much money we have available, we have prioritised spend and this is the core business of Local Governments – to put back into the community.

“I encourage everyone interested to take a look at the plan and have your say.”

The draft Operational Plan including proposed Fees and Charges will be on exhibition until Wednesday, May 26.

View the plan and Have Your Say at yourvoiceourcoast.com