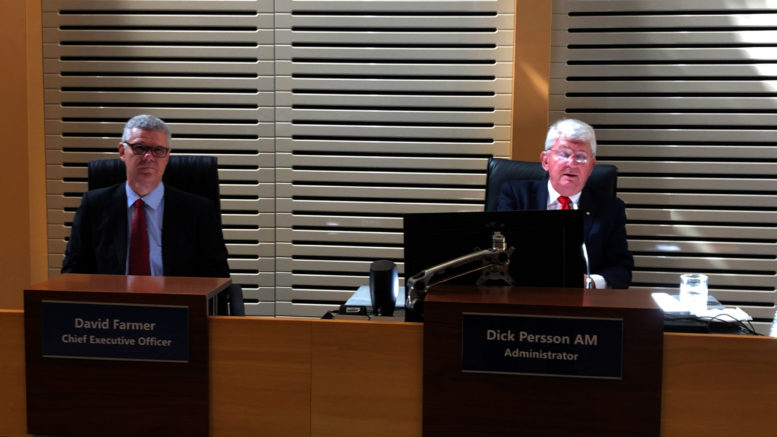 The Minister for Local Government should take whatever action is necessary to prevent the return of the suspended councillors, says Central Coast Administrator, Dick Persson.

He also wants the new CEO, David Farmer, to buy a new and simpler IT system, despite more than $60M being already spent on a new system.

An extraordinary meeting was held on Thursday, April 15, when Persson made public his final report into the financial failings of Central Coast Council.

He had already delivered the report to the Minister for Local Government, Shelley Hancock.

Persson wants to see a delay to the September election to allow an Inquiry to determine what is needed to achieve a successful merger of the former Wyong and Gosford councils.

“I’m calling for an inquiry, but not for the reasons that others might think,” Persson said.

“We know what happened here and my two previous reports provide this detail, there is nothing more to uncover.

“I encourage the community not to fall for the politicking of this issue.”

Persson said he believed his idea for an Inquiry would have far greater community support than an Inquiry that would be used by competing political actors trying to blame each other for what occurred.

“We know what occurred, it is now time to look ahead and help ensure the success of the sixth largest council in Australia,” he said.

His investigation concluded that by far the biggest reason Council became insolvent was due to mismanagement of their budget over the years following the merger and leading to the councillors’ suspension.

The councils were merged in May 2016 and the new Central Coast Council was under administration until September 2017, when the councillors were elected.

“There is pressure by many to hold a Public Inquiry into what went wrong here,” Persson said.

“With due respect to those people, Acting CEO Rik Hart and I have investigated what went wrong and published those findings.

“Many of those calling for an Inquiry don’t like my conclusion because I have made it very clear that the financial collapse is not due to the local government amalgamation.

“I have formed the view that the merger of the Gosford and Wyong local government areas was always going to be one of the harder ones, and that it was well short of completion when councillors returned in 2018 (sic).

“It is very clear that the new Council had little interest in continuing the hard work of achieving efficiencies and using those savings to expand the delivery and quality of services.

“Instead, they embarked upon a program of expansion of both capital and recurrent programs with no attempt to establish how they were going to be paid for.”

The councillors were suspended in October 2020 when it became public that Council faced sudden and serious liquidity issues and were in danger of not being able to pay staff.

It later emerged that the Council had been unlawfully using restricted funds for operational purposes.

Persson said that the use of restricted funds was not unimportant, but it was also not the reason that the budget blew out.

“Even though those in charge thought that those funds could be used for their expanded spending, they must have known that they would eventually run out,” he said.

“To use them for capital spending was one thing, but to use them to prop up a rapidly deteriorating bottom line is inexcusable at best and negligent at worse (sic).”

Persson outlined various reasons in his final report as to why Council should remain in administration, most notably that the merging of the two former Councils was incomplete.

“I believe the best outcome for Central Coast Council and the community would be a further extended period under administration, this would allow the new CEO, Mr Farmer, and a new administrator, adequate time to complete the merger and rebuild community confidence without the distraction of elected representatives intent on playing out broader political agendas,” Persson said.

“Should the Minister decide to allow the councillors to return prior to the September election, I recommend that Performance Improvement Orders are put in place, including the appointment of a financial controller, and I recommend that person be Mr Rik Hart.

“My final report was provided to the Minister for Local Government earlier in the week, we now await the Minister’s decision on the future of the suspended councillors.”

The Minister confirmed that she had received the report and would now carefully examine its findings and recommendations.

“I will now determine the future of the Council taking into consideration the interim administrator’s final report, his two earlier reports, the views of the local community and advice from the Office of Local Government,” Hancock said.

“To ensure stability for the community, I will announce my decision prior to the expiration of the current interim administrator’s term on April 29.”

Cats on the Coast attack 3.8 million birds, mammals and reptiles per year

2 Comments on "Council should remain in administration – Persson"