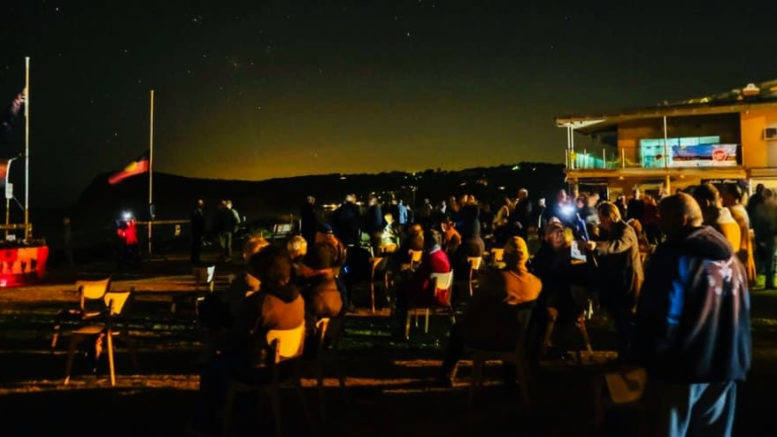 About 250 early risers from the Copacabana community rallied at dawn on the village green and surrounding areas on ANZAC Day.

“Bob’s horse was hit twice as he rode in the cavalry charge of the Australian 4th Light Horse Brigade which broke through Turkish defences to take the wells of Beersheba in October 1917,” Atkinson said.

“Ollie read a heartfelt poem by Warren Eggleton on that now famous event which he said epitomises the true meaning of the word ANZAC – courage, mateship and dedication to duty.

“The commemorative address was given by recently retired Captain Anthony Rayner, who was awarded Membership of the Order of Australia in recognition for his specialist work with the Royal Australian Navy during his 35 years of service.”

Captain Rayner said ANZAC Day is unique to Australia; nothing compares to it across the world and it is something “we need to retain and cherish in our culture and national ethos”.

“To my mind, ANZAC Day is an occasion which can mean many things to many different people,” he said.

“For some, it is a time to reflect on and acknowledge the service given by those in our Armed Services to this country; to many it is a time of great sadness, remembering lost friends and companions.

“However, it is also the time to remember and acknowledge successes, comradeship, mateship and other great benefits that come from military service.

“It has also become a day of national pride for our achievements as a country.”

Master of ceremonies and long-time Copacabana resident and local lawyer, Peter Hill, said he felt Gallipoli was a test of character, rather than about military strength.

“What can our community learn about the lessons of the Anzacs?” he said.

“Many were larrikins and came from diverse backgrounds- they often ignored the rules in order to join up and serve their country.

“Some of our First Nations people hid their Aboriginality and some young diggers lied about their age.

“The diggers worked together (and) their communities supported them on the home front.”

With two flags at half-mast, the sun rose over Copacabana Beach to a recorded bugler sounding The Last Post and Reveille, with many wreaths and flags placed on behalf of and by various military and other organisations, local businesses, Federal and State Government MPs and Copacabana residents.

The Dawn Service was organised by the Naval Veterans’ Association, based in Copacabana for over 15 years, together with a group of local residents.

Be the first to comment on "Copacabana rallies for dawn service"