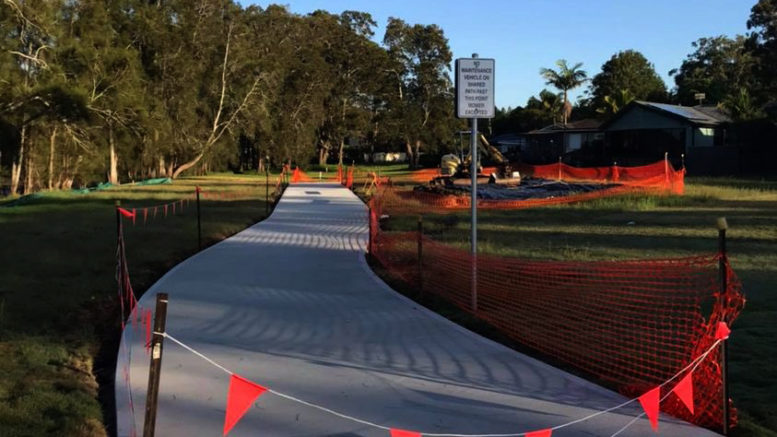 The Tuggerawong shared pathway, funded by the Stronger Communities Fund

A NSW Government committee looking into how grants are allocated to councils is scathing in its interim report which was tabled in State Parliament on March 30.

The committee uncovered deep and systematic problems with the Stronger Communities Fund tied grants round.

This is the committee that exposed the $90M grant to Hornsby Council from the fund which was supposed to go to merged councils.

The report said that problems demonstrated the brazenly partisan nature and scale of the maladministration of funds.

The committee found that the round was worth $252M, two and a half times more than the Federal sports rorts scandal.

It outlined 13 findings including that the Stronger Communities Fund tied grants round was a clear abuse of the grants process and that the Office of Local Government failed to publish revised guidelines.

It was an improper allocation of public money and falls well short of principles of proper grants administration and public expectations, the report said.

It offered up 15 recommendations including that the NSW Government update its Good Practice Guide to Grants Administration and ensure that key requirements are enforceable.

It wants all grant application information, including guidelines, objectives and eligibility, and open and closing dates available on a website.

However, the committee goes further.

In recommendation 10, it urges the NSW Government, in consultation with the peak body Local Government NSW, to overhaul its current model of grant funding to local councils to move towards providing the bulk of its funding through a funding formula.

That formula would: be linked to local councils’ existing strategic planning documents and priorities; acknowledge the additional costs and needs of regional and remote councils; be predictable and provide multi-year funding commitments; and, be regularly and publicly reviewed to ensure that it met the needs of the sector.

The report said the Stronger Communities Fund tied grants round was an alarming example of the lack of transparency and accountability in NSW Government grant programs.

“The fund was originally established to assist councils created from the NSW Government’s failed council amalgamations, but morphed into a brazen pork barrel scheme,” the report said.

“Ultimately the Coalition designed a scheme with so few checks and balances that $252M of public money was handed out on a purely political basis to sort out the Coalition’s political problems, to gain an advantage in the 2019 state election and to punish any council that had objected to being forcibly merged.

“The Stronger Communities Fund is just one example of how NSW Government grant processes lack transparency, accountability and oversight.

“Assessment processes and the role of Ministerial discretion in decisions lack transparency.

“Government MPs have input into identification and even assessment of projects while non-government MPs are often excluded.

“The committee came to the conclusion that the current grants system is broken and in need of a fundamental overhaul,” the report said.

However, there was a dissenting view from three of the seven committee members, The National’s Trevor Khan MLC, and the Liberal Party’s Matthew Mason-Cox MLC and Natalie Ward MLC.

“This Inquiry was established on July 3, 2020, with the intent of bringing greater transparency and public accountability to the process, administration and decision making around government grants programs,” the three said.

“The authors of this dissenting statement unreservedly support transparency and accountability.

“While this has largely informed the committee, the evidence received is not accurately reflected in this report.

“The intentions of the Fund and overwhelmingly its outcomes, were to help councils improve amenities for local communities and the quality of life for citizens of NSW.

“That is exactly what the Stronger Communities Fund has done, right across NSW.”

The committee is continuing to look into other NSW Government grant programs and will release a second report covering these issues later in the year.

The committee will now turn its attention to bushfire relief grants and allegations that a further $177M was allocated improperly.

Council decided to formally apply for a 15 percent rate rise