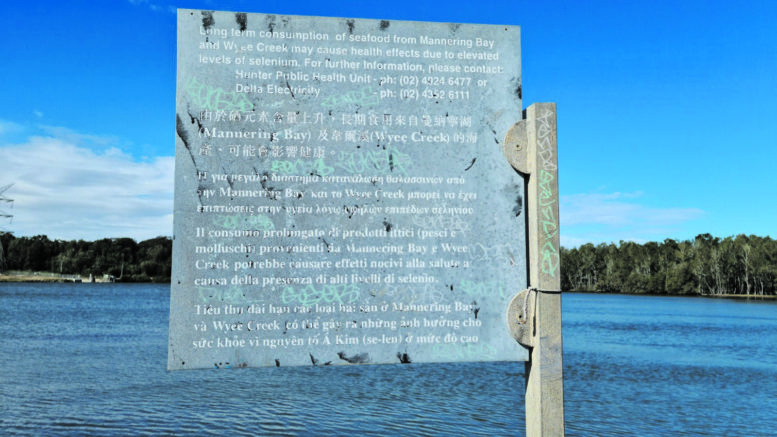 The Central Coast Community Better Planning Group (CCCBPG) has called for a review of the population growth projections for the northern area of the Central Coast.

Chair of CCCBPG, Gary Chestnut, said the bottom line was that the current ash dam at Vales Point was approaching 100 million tons and could be considered as toxic, as it is not currently being contained.

“The runoff from the current ash dam leads to Lake Macquarie,” Chestnut said.

“Due to pollution entering Lake Macquarie, the NSW Department of Primary Industries has closed the whole of the waters of the Vales Point power station outlet canal for any type of fishing by any method, and the waters within 100m of the canal extremity into Lake Macquarie.”

The Legislative Council’s inquiry uncovered divergent views as to whether coal ash poses any risks.

The report said: “Community members, environmental groups and health professionals argued that coal ash should be treated as hazardous waste material given the significant environmental and health risks that it poses and has caused.

“In contrast, industry representatives and power station operators commented that there were technical processes that could be carried out, but are not currently, to make coal ash non-toxic and inert.”

Chestnut said CCCPBG believed those comments were acknowledgement that untreated coal ash was neither non-toxic nor inert.

“The inquiry formulated 16 recommendations of which five have a direct relationship to the Central Coast,” he said.

The five relevant recommendations are:

Recommendation No 3 – That the NSW Environment Protection Authority (EPA) conduct and publish a study of surface and ground water around all coal fired power stations and associated coal ash dams and their potential impacts on the surrounding environment by the end of 2022;

Recommendation No 6 – That NSW Health immediately undertake epidemiological assessment of the health of residents near coal ash dams to establish the health impacts of coal ash and publish by December 2022;

Recommendation No 7 – That the NSW EPA commission a comprehensive and independent assessment of the environmental impacts of coal ash dams to provide a better understanding of the issues and to inform best practice remediation;

Recommendation No 8 – That the Department of Planning, Industry and Environment establish a coal ash re-use taskforce comprised of state government agencies, unions, industry stakeholders and community groups to lead development of a strategy to achieve at least 80 per cent reuse of coal ash produced in NSW and report by 2022;

Recommendation No 9 – that the task force inquire and review regulations affecting coal ash reuse, including: the stability and regulation of ash dams; waste standards to ensure that coal ash is not contaminated with other waste; and, land remediation including the state and effectiveness of current capping, the current and future risk of leakage of contamination into the surrounding environment and impacts of vegetation cover (including any contaminated vegetation, release of contaminants into the air via transpiration and cracking of capping materials) to ensure the safe and beneficial reuse of coal ash while promoting strong environmental and public health standards.

“We have met with Central Coast Council Administrator, Dick Persson, Environment and Planning Director, Scott Cox, and Chief Operating Officer, Malcolm Ryan, and asked that Council reflect upon the findings of the health study.

“In addition to the health studies, Council needs to instigate a study on suitable water quality controls specific for any development leading into Lake Munmorah and Budgewoi Lake.

“Lake Munmorah has an average retention time of 520 days or 1.4 years or 2.4 times longer than Tuggerah Lakes, so the design of any water quality controls leading into Lake Munmorah must be, in our opinion, site specific,” Chestnut said.

“To do otherwise, in our opinion, will lead to decline in the biodiversity value of Lake Munmorah and adversely impact upon the quality of life of residents adjoining Lake Munmorah,” he said.

“It is our opinion that there is a strong argument that site specific water quality controls are also needed for Budgewoi Lake.

“CCCBPG would like to see a moratorium on any rezoning within the Greater Lake Munmorah Structure Plan area until the health and water quality reports are finalised,” Chestnut said.