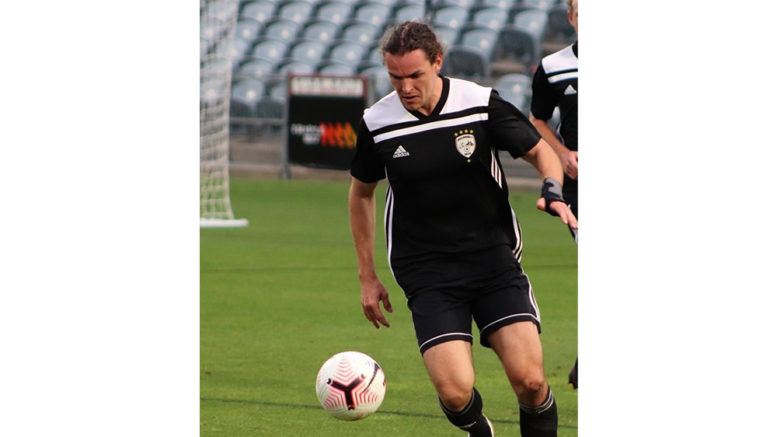 A tight contest at EDSAAC Oval was thrashed out on Sunday, April 11, between two Tuggerah Lakes’ rivals, Killarney District Terriers and the Kanwal Warnervale Rovers, in the top division Battlewin Premier League.

Coming back with three late goals was the Terriers’ way to take out the win in this opening round match, with an end score reading 4 – 3.

It was the Terriers who got off to an early lead through a goal scored by Harry Fountain 20 minutes into the game.

The ball came in from a corner and was cleared out to the edge of the box where it found the foot of Fountain who struck it well to find the net.

A further 20 minutes passed with the teams battling for opportunities in possession, until a Kanwal equaliser came after a penalty was given due to a foul in the box.

The contest between these two heated up, with a red card being given to the Rovers before the end of the first half, reducing the visitors to 10 men.

Despite this, the Rovers came out hot in the second half and found the lead five minutes in through a breakaway goal.

Then, five minutes later, a similar mishap in the Terriers’ defensive line led to another breakaway goal being conceded, bringing the score to 1 – 3.

Throughout this time, multiple chances had come to the Terriers, although quality goalkeeping from Kanwal cleared the ball off the line to prevent the hosts from getting back into the game.

With only eight minutes to go, Daniel Roger for the Terriers found the opportunity to push back on the scoreboard and he took it, taking away the Rovers’ cushioned lead.

In the end, it was the Terriers substitute, Matt Hall, who was the star of the day, scoring two goals in the last five minutes to first level the score then pull his team out in front.

Hall’s first goal was a header in the box, his second a shot from the edge of the box that rocketed in around the keeper.

The game closed off, ending 4 – 3, with the disappointed Rovers going away without a win despite making a great effort to play one man down.

For Terriers first grade Coach, Chris Ackerley, the win was a great result after testing out new players.

“We’ve got quite a different side from last year,” said Ackerley.

“We have had some players move away this year, so a lot of the young boys got an opportunity to play first grade football with us.

“The two stand outs for us were Jayden Radford and our captain, Sam Kirk.”

Ackerley continued to comment on how the game has affected his team’s form moving ahead into their midweek clash against Gosford City in the Semi Final of the MATE Association Cup.

“This game sets us up terrifically well to play against Gosford City.

“It gives the boys the confidence that we can score goals.

“We know Gosford will be a difficult game.

“Even though they are now in the division below us, they have been playing very well in the MATE Cup, so it’ll be a tough struggle.

“We will be going in full of confidence yet making sure we pay the respect that Gosford deserve, knowing that they will be up for the semi as well.”

Gosford City had a very energetic start to their season in the Division One league, defeating the Umina Eagles 6 – 0.

This MATE Cup Semi Final will be played on Wednesday evening, April 14, 8:15pm, at Pluim Park, after the first Semi clash of Southern and Ettalong United verses Terrigal United.