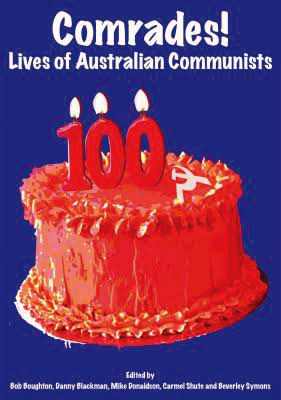 Comrades! comprises stories of 100 rank and file communists, not the really well-known leaders.

It is not an historical analysis.

The history is told through 100 individual narratives or stories, and organised in chronological order, with stories of members who joined the Communist Party of Australia (CPA) between the 1920s and 1970s.

This most impressive book has been published to mark 100 years since establishment of the Communist Party of Australia in 1920.

Beverley Symons, one of the editors, is a Central Coast resident, and two other local residents are featured in the book: Tom and Audrey McDonald.

She worked for the peace movement and the Vietnam Moratorium Campaign and then completed a PhD research degree in history at the University of Wollongong, on women workers in the metal industry, and the campaign for equal pay during WW2.

Beverley is active locally in the Greens Party and the local Dying with Dignity Group and University of the Third Age (U3A).

The other residents of the Central Coast featured in the book, Tom and Audrey McDonald, joined the CPA in the 1940s and 1950s respectively.

Tom McDonald is a lifelong Marxist and activist.

He was an official of the Building Workers Industrial Union (BWIU) from 1950-1991, and overall a member of his union (now the Construction, Forestry, Maritime, Mining and Energy Union) for over 75 years.

He was awarded the Order of Australia medal for services to trade unionism in 1993, nominated by the ACTU.

Audrey McDonald is highly respected for her work in the women’s, peace, and anti-apartheid movements.

She was awarded the Order of Australia medal for services to women and unionism.

She and Tom are still involved in community organising.

Beverley Symons said: “Reading this book gives me the impression that it was the communists who started off so many social movements and helped them to develop, for example the peace movement, Aboriginal rights definitely, the equal pay movement, women’s rights of course, and the trade union movement.”

Members of the CPA did an amazing amount of work and had an enormous impact because they were involved in so many activities.

The 1940s during WW2 was the most active time for the CPA; the highest point in the CPA membership was 23,000 members at the end of the war.

The party was dissolved in 1991, after dissolution of the Soviet Union, and the end of the Cold War.

Many former CPA members are involved in the Greens Party, in the left wing of the Australian Labor Party, and the SEARCH Foundation, the publishers of this book.

Comrades! is a lively read and highly recommended for those interested in labour history, the Left and social movements more generally in Australia.