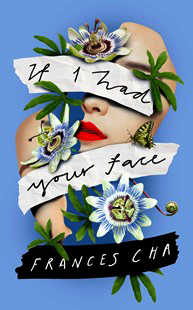 If I Had Your Face

If I Had Your Face is the debut novel from Frances Cha about a group of young women who live in Seoul.

There is Ara, who for some reason has lost her ability to speak.

She is a hairdresser who is obsessed with Taein from the K-pop band Crown.

She lives with Sujin.

The two met while when they were going to school in Cheongju.

Sujin was at the Loring Center, which was housing for an orphanage as well “as a home for the disabled and deformed.”

Sujin works in a nail salon but dreams of becoming a salon girl (a salon is where men go to drink and are supplied with young, surgically beautiful women to keep them company).

South Korea is said to have the highest rates of plastic surgery in the world with as many as one-third of all women going under the knife.

It is seen as a critical step in career advancement.

Right now, Sujin is not pretty enough to be a salon girl, but she has been saving hard to have the plastic surgery required to become pretty enough.

Kyuri lives across the hall from Ara and Sujin and works at Ajax.

Ajax is a ten-percent salon, which “employs the prettiest 10 percent of girls in the industry.”

Kyuri can guide Sujin on the best beauty enhancing procedures because she has had most of them, “stitches on her double eyelids look naturally faint, while her nose is raised, her cheekbones tapered, and her entire jaw realigned and shaved into a slim v-line.”

Bruce is one of Kyuri’s favourite customers at Ajax, he showers her with expensive handbags as he is ultra-rich.

She has grown to be a little bit in love with him.

Miho lives with Kyuri and is a talented artist who studied in New York.

There she met Ruby who was dating Hanbin (both of them unbelievably wealthy).

Miho and Hanbin are now back in Korea and dating each other.

Wonna lives downstairs and is married.

She lived with her grandmother until she was eight.

Her grandmother wasn’t the touchy feely type, “But I grew up not knowing the difference between a bearable life and an unbearable life, and by the time I discovered there was such a thing, it was too late.”

There was a terrible accident involving her cousin.

She desperately wants a child but has had a few miscarriages.

There were a lot of Korean references in this story, which I completely understand as the book is set there, however for an ignoramus like me, it would have been handy to have footnotes explaining what the words referred to (such as office-tel, salon girl).

There seems to be a lot of focus on going to good schools and getting a job in a top tier firm. Jobs in second and third tier conglomerates are frowned upon.

Men don’t come out of this book looking so good.

Both rich and poor (but particularly the rich) men seem to have little consideration for women.

Actually, the women of authority (rich mothers, bosses) also don’t come out of it looking so good.

Come to think of it there is a lot of meanness all around.

Seems like this group of women needed to stick together because it was them against the rest of the world.

It was an eye opening book about life in Korea for young women.