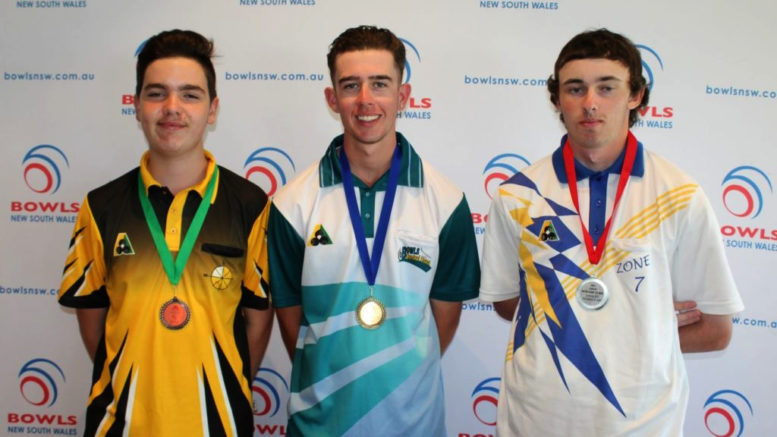 Bowls Central Coast, Zone 15, has finished third overall at the State Under 18, Seven-a-side Championships held in Dubbo from Wednesday to Thursday, April 7-8.

Seven junior bowlers entered the competition from every zone in NSW, with each team member playing in either the Fours, Pairs or Singles series.

On Wednesday, the sectional round was held over three games played for each team, with the fourth highest places then advancing through to the finals on Thursday.

From Ettalong Memorial Bowling Club came Bailey Meti, the recent Under 18 Zone 15 Bowler of the Year (2020), who continued over the two days to win the Singles event.

In the sectional round, Bailey won all three games with a tight contest coming in the very first game against Riverina District, a match up he won 21-19.

From here, two further wins finished off his Day One, firstly over Sydney South West District, 21 – 7, and then over Newcastle in a tight match that finished 21-20.

Advancing through to the finals, Bailey first overcame Belrose with a 21-16 lead before winning the Grand Final against Nicholas Tyce from the South Coast District with an end score of 21-13.

Although not reflected on the scoresheet, Bailey maintained that the final was not a clear cut win.

“It was a very close battle at the start and at one point I was down seven points to three,” Bailey commented.

“At this point I started playing a little better until the game got out of hand for Tyce.

“Although I was confident in myself the whole way through the championships, it was always a challenge to get the last couple of shots in each game on target.

“In Singles, these last shots are always the hardest to get.”

With his 18th birthday coming in October to promote Bailey into the Opens division, this is the first and last time he will win this junior event.

Nonetheless, Bailey still has the 2021 Under 18’s NSW State Championships to prepare for and has set his sight on being selected into the Australian National Championships to be held in October.

Furthermore, Bailey is preparing for a future career in Lawn Bowls which he hopes to take into the Opens.

“In the future, I hope to compete in the Commonwealth Games for Australia, if not in 2022, then in the next one.

“I feel I have shown a lot of potential in going this far but will need to keep winning events and show my commitment.”

In the Pairs, the Mingara Bowling Club duo of Billy Waite and Blane Cook finished eighth.