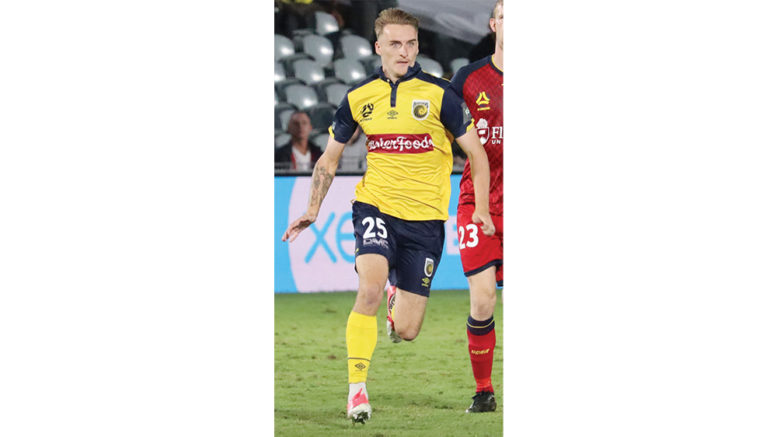 Back on March 8, Woy Woy local, Matt Hatch, set the A-League alight when he scored the fastest debut goal in Australian National League history for the Central Coast Mariners, after only 25 seconds on the pitch.

Recently, Central Coast News caught up with Hatch to ask him about the experience and to ascertain what role his Peninsula upbringing has played in helping him reach the top level of football in Australia.

Early in the morning on Tuesday, March 30, at the Central Coast Mariners Centre of Excellence training facility in Tuggerah, squeezed in between a dawn training and a consecutive game video review session, I was afforded the opportunity to put these questions to the young footballer.

Hatch was open about the valuable role the football club has played in his development, as well as his commitment to the club in more ways than one.

Having lived in Woy Woy all his life and attending Woy Woy South Public School, Hatch started his soccer career at the age of five with the Woy Woy Roosters.

At ten years of age, Hatch moved to the Kincumber Roos before joining the Central Coast Academy – back then known as Central Coast FC – where he has been ever since.

Throughout this time, Hatch was from the very first an impassioned supporter of the club.

“I used to drag mum to all the Mariners home games we could attend,” he said.

“I used to sit with the yellow army, and it was always fun seeing how much support the club got from their fans.”

After starting off in the Academy, it took many years before he was singed in the first team squad in November 2020, a process that involved many challenges to Hatch and his family.

“It took a lot of hard work and dedication to get me to this point, as well as a lot of sacrifices, especially from my mum and my pa.

“It involved driving me to trainings four times a week as well as a lot of travelling for matches – I remember once in the first year I joined we had to go to Dubbo for a game.”

After being signed, Hatch spent three matches on the bench and seven not selected in the playing squad, all the while training with the team and biding his time.

“I just tried to put my head down, work hard in training and wait for my opportunity to come.

“I was lucky enough that after a good week in training the coaching staff were happy with how I was going and I think that is why they decided to put me in the team, and also because I think they knew that my pace could hurt them late on in the game.”

This moment came on Match Day 11, at Central Coast Stadium against Macarthur FC.

In the 81st minute and with the Mariners ahead one goal to zero, Daniel Bouman left the field to make room for Hatch’s debut run.

“Although I am a defender, the coaches told me I was coming on in an attacking role.

“They said use your pace, make runs in behind, work hard, defend well and most importantly, enjoy the game.”

On the very next passage of play, Michal Janota stole the ball for the Mariners from a throw-in high up the pitch and launched a through ball ahead of Alou Kuol in the box on a slight angle.

With Macarthur’s Mark Milligan racing across to prevent Kuol’s shot, the highest scoring Mariner of 2021 surprise everyone when he feinted the shot, cut the ball in-field to Hatch who found himself unmarked in front of Adam Federici in goal.

With his first touch of the ball, Hatch side-footed the ball to the left of Federici, who dove right in his misgiven anticipation.

With that composed finish, Matt Hatch entered himself into the history books, splitting the previous record for fastest debut goal in half.

“I thought Kuol was going to shoot,” replied Hatch upon my asking as to how the moment felt.

“It was a beautiful ball from him – he put me on a platter.

“I just swung at the ball and didn’t realise what happened.

“I just couldn’t believe it, that it actually went in.

“I found out a few hours later that I had broken that record and it was a crazy feeling.

“After the game, we went back in the changeroom and the boys all got around me.

“I feel like the comradery and culture in this team is like no other, the way we fight for each other.

With more games to come this season and a long career ahead of him, Mariners fans are left to wait and see what the young product of the club’s local development will do next.

The full interview can be found on our website.