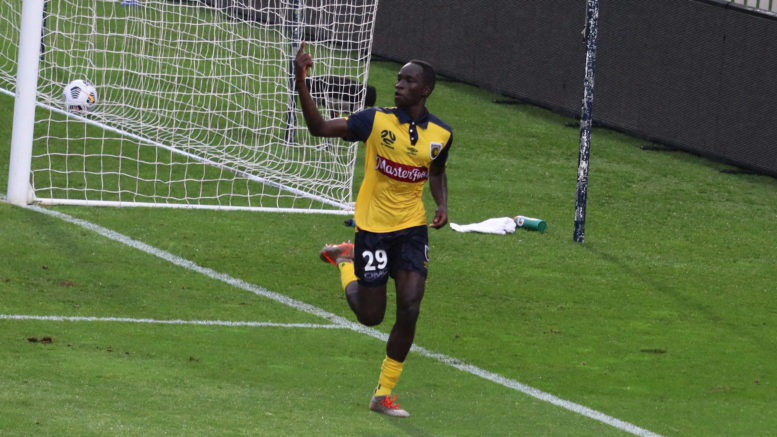 It is up and away to the German Bundesliga for Central Coast Mariner, Alou Kuol, who last week was announced to now be signed for four years with VfB Stuttgart in a transfer to go ahead with the conclusion of the 2020/21 A-League season.

The transition to the top German national football league, featuring current European Champions, Bayern Munich, is a major step forward in the footballing career of the young talent to come from the Goulburn Valley Suns in 2019.

Making his way into the A-League for the Mariners at the start of this season, playing in and scoring the winning goal in his debut game against the Newcastle Jets on December 31, Kuol has since played a crucial role in his squad’s title race.

Currently, Kuol sits on seven goals and has most recently become a final third substitute designed to insert a massive energy boost in attack against the tiring defence of the opposition.

It is a tactic that has worked with clinical execution a number of times this season, most notably against Adelaide United on April 1, when Kuol scored the winning goal in the 76th minute.

Mariners’ Head of Football, Ken Schembri, said the move is a great step for Kuol and is a sign of the strong work being done in the Mariners’ Academy.

“As a club, we are very proud of Alou, and of having given him an opportunity through our Academy to make his mark on the A-League, and to now move to a big club in the Bundesliga,” Schembri said.

“Alou is a product of our scholarship program that is supported by a number of partners, including Anton Tagliaferro, and our thanks goes to all involved for their continuous support, especially Mike Charlesworth for his ongoing support of the club.”

The agreement over Kuol’s future footballing also brings a degree of support for the Mariners who are to benefit from a sell on clause if his future promise turns into sustained success.

That is to say, if Kuol’s value as a footballer increases in his time at Stuttgart and if he is transferred to a new club, the Mariners are to benefit again from this sale.

Although the future of the Mariners still appears to be hanging in the balance, with rumours of ownership negotiations between owner, Mike Charlesworth and Manchester United, and the team’s long-lasting lead atop the A-League now undone after a loss to Western United, this transfer may provide necessary financial relief to boost their overall bargaining strength.

Two draws in three days and the spoon is ours (again)