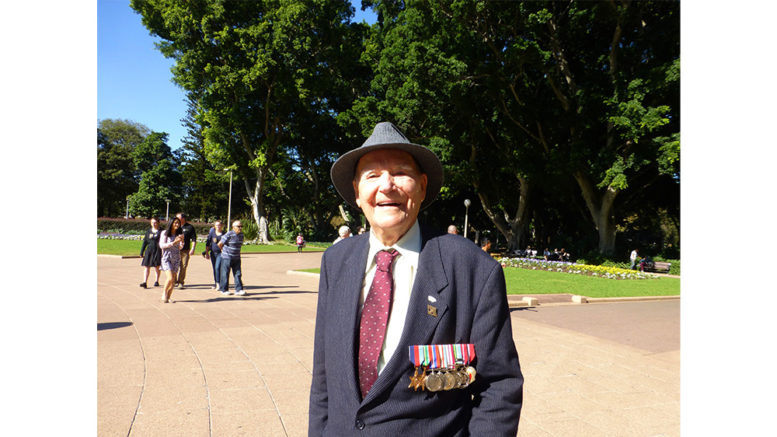 Avoca locals are encouraged to head to Chapman Cres at 10am this Anzac Day to support 97-year-old John Bartlett, who will be doing his own march as he cannot do the one in Sydney.

Since his service in World War II, Mr Bartlett has never missed an Anzac Day march and is determined not to let being “too old” get in the way of honouring his fellow vets.

Mr Bartlett last did the Sydney march in 2019, but when COVID-19 restrictions saw the event cancelled last year, he decided to march solo through the streets of Avoca.

After Duane Coogan and his daughter, Narelle Bartlett, sent out a message to their neighbours to come out and support him, more than 200 people stood in their driveways to watch as Mr Bartlett walked from the top of Chapman Cres, down the street and back, wearing his much-earned decorations.

Mr Bartlett was only 18 when he was drafted to HMAS Manoora in 1942.

He participated in nine major landings between New Guinea, The Philippines and Borneo, and also served with British Commonwealth Occupation Forces in Japan.

At the end of the war, he was part of The Australian Squadron when they accepted the surrender of the Japanese forces in Rabaul, New Britain, in Papua New Guinea.

He stayed in the Navy and trained in bomb and mine disposal, helping to clear unexploded ordnance in New Guinea, The Solomon Islands, New Britain, New Ireland and Northern Queensland.

Mr Bartlett trained as Torpedo and Anti-Submarine, Bomb and Mine Disposal instructor, and was then drafted to HMAS Australia and promoted to Chief Petty Officer.

The Riverina-region born veteran was lucky enough to be a Guard of Honour to welcome Queen Elizabeth and Prince Philip on their visit to Sydney in 1954, and in 1994, Mr Bartlett was presented with the Philippine Liberation Medal at NSW Parliament House.

Last year he received the Commemorative Medallion acknowledging the significance of the 75th anniversary of the end of WWII.

Mr Bartlett will be just one of many Coast veterans who will be celebrating Anzac Day on April 25.

Saratoga local and President of the Davistown RSL Sub Branch, Paul Osborn, served in the Royal Australian Navy for six years and said he would join others around the Central Coast to honour all those who served and made the supreme sacrifice but did not return.

“My grandfather served in World War I in France and World War II,” Mr Osborn said.

“My father served in the Middle East and New Guinea and in Japan in World War II.

“We all served the country, so we are all able to enjoy the freedoms that we all experience today.”

Mr Osborn said the most significant thing he has taken away from his time in the Royal Australian Navy is “the camaraderie, friendship and bonds formed with all the servicemen and women that last a lifetime”.

Panthers junior AFL players excited to get back on the paddock

1 Comment on "Age will not weary this surviving ANZAC"