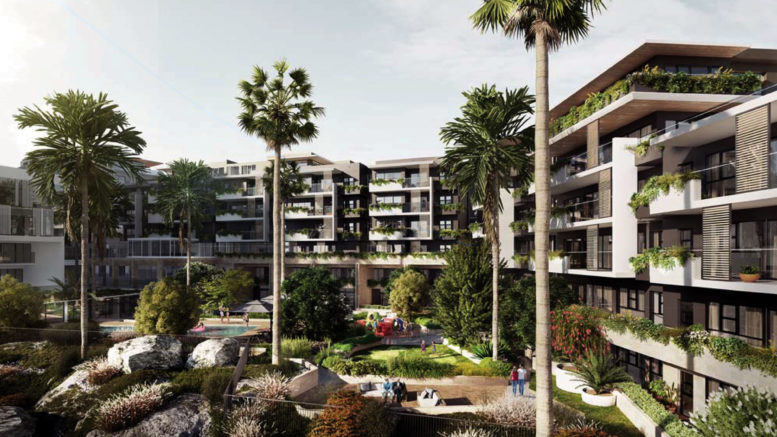 An artist’s impression of the common area, viewed from the west Photo: ADG Architects

An $110M residential project planned for 89 John Whiteway Dr, Gosford, has been scaled back in response to submissions received, with the number of units cut from 260 to 204 and a reduction in building height from 12 storeys to 5-9 storeys.

The proponent’s lengthy response to submissions went up on the Department of Planning’s Major Projects website on April 14 for a 14-day re-exhibition period as the project proceeds to the assessment phase as a State Significant Development.

Originally lodged in March 2020, the DA attracted 16 public submissions, as well as nine submissions from government agencies, public authorities and organisations, during its 28 day exhibition period.

The proponent’s response to submissions says the key issues raised can be broadly grouped into the following categories: built form; visual impacts; solar impacts; and amenity.

“Since the exhibition of the proposal and subsequent advice received from the Gosford Design Advisory Panel (DAP) the proposal has extensively reviewed the overall approach and elements of the original application,” the response says.

“This process was undertaken through close engagement with key stakeholders, including the Department of Planning, Industry and Environment and has led to the development of an amended scheme, which substantially addresses the key issues raised during exhibition.

It says the project will enhance the degraded portion of the site with approximately 15,000sq m of green space and a tree canopy.

Other key amendments include refinements to the building envelopes and façade as well as design changes to re-orient units to maximise views to Brisbane Water and minimise impacts to Rumbalara Reserve.

The number of car spaces has been reduced from 400 to 305, which is nine spaces above the rate required under the Gosford City Centre Development Control Plan 2018.

The response says the project will provide an innovative mix of housing typologies and support the local job economy during construction.